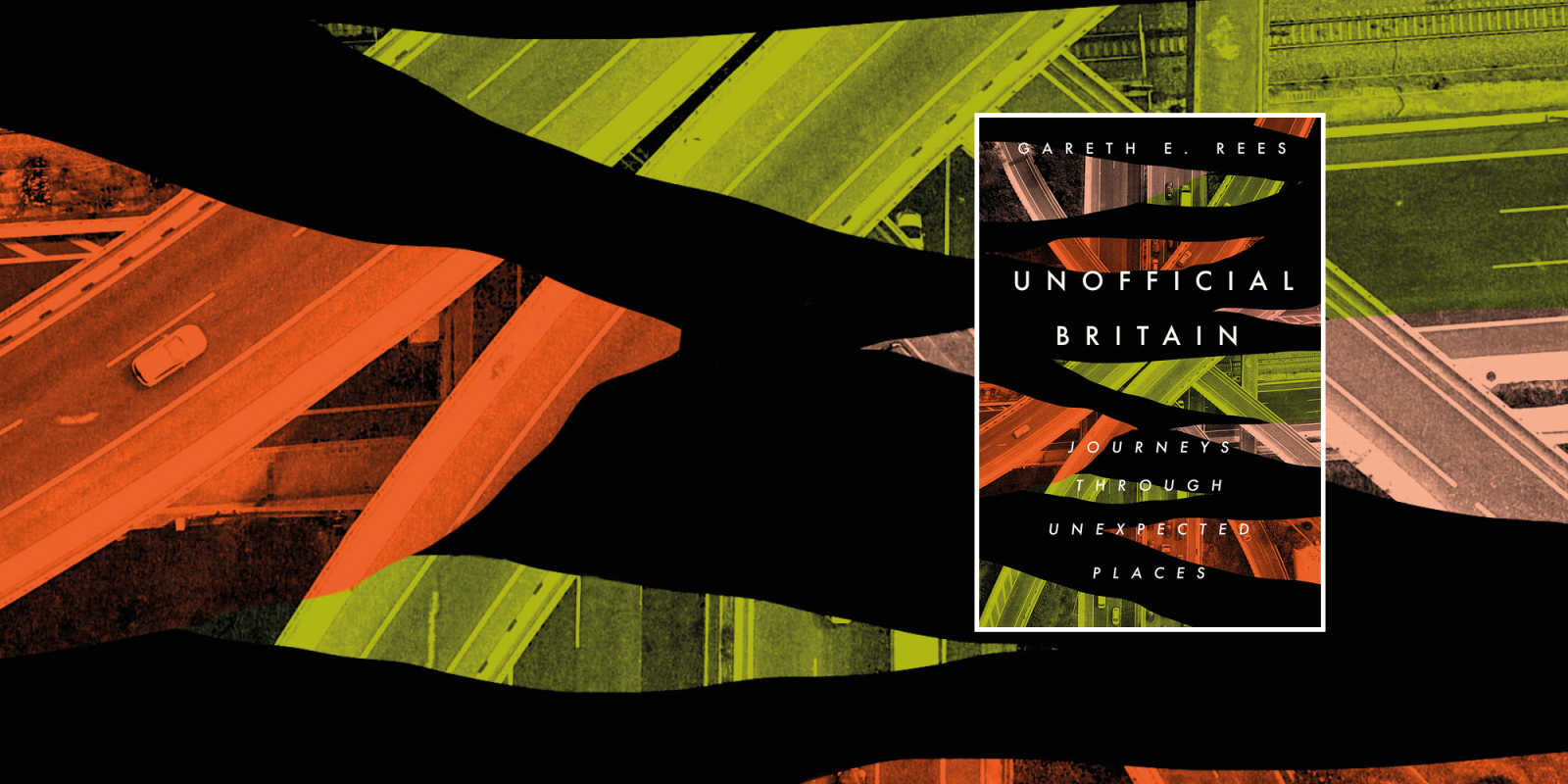 ‘Terrific… Britain’s urban landscape is just as freighted with myth and mystery as its castles and ancient monuments and [Rees] proves it by unearthing a treasure trove of riveting stories.’ – Sunday Times Best Books of the Year, 2020

“The mythical and the municipal collide in a weirdly compelling tour of Britain’s built environment” – The Financial Times.

“Rees finds soul in these soulless locations, charting stories and encounters as rich as those found among rolling hills and chocolate box villages. A delight.” – The New European

——————————————
There is a Britain that exists outside of the official histories and guidebooks – places that lie on the margins, left behind. A Britain in the cracks of the urban façade where unexpected life can flourish. Welcome to UNOFFICIAL BRITAIN.

This is a land of industrial estates and electricity pylons, of motorway service stations and haunted council houses, of roundabouts and flyovers.

Places where modern life speeds past but where people and stories nevertheless collect. Places where human dramas play out: stories of love, violence, fear, boredom and artistic expression.

Places of ghost sightings, first kisses, experiments with drugs, refuges for the homeless, hangouts for the outcasts.

Struck by the power of these stories and experiences, Gareth E. Rees set out to explore these spaces and the essential part they have played in the history and geography of our isles.Though mundane and disregarded, they can be as powerfully influential in our lives, and imaginations, as any picture postcard tourist destination.

This is Unofficial Britain, a personal journey along the edges of a landscape brimming with mystery, folklore and myth.

‘Unexpected and fascinating’ – Melissa Harrison, author of The Stubborn Light of Things

“An appreciation of quotidian, overlooked and sometimes grotty landscapes; part memoir, part ‘hauntology’, and a stiff dose of nearness and weirdness to counter the tweeness that afflicts some topographical writing.”  – Will Wiles, author of Plume.

“You should read this book. It will make you stay up too late, laugh out loud, and then freak yourself out looking out of the window at the haunted-looking binbag blowing past Carpet Right in the dead of night.” – Michael Smith, author of Unreal City

“A wonderful ramble through the Brexit Britain of today – warts and all.” – Elsewhere: A Journal of Place

“Essential reading if you are interested in the urban wyrd and how folklore is mutating and developing in modern times.” – Folk Horror Revival

“A Gothic vision of modern Britain. But this is not a Gothic of ruined castles, windswept moors, ill-fated heroines and tainted bloodlines. Rees’s Gothic is one rooted in the late twentieth century, an era whose time has come and gone but whose artefacts still dominate the landscape of present-day Britain.” – The Psychogeographic Review

“Unofficial Britain was my book of 2020” – Paul Cheney, Half Man Half Book

“I tore through this book, which took me from hairs rising on the back of my neck (ghosts in suburbia) to howling with laughter (the motorways chapter – it alone makes this book worthwhile)” – Diane Coyle, The Enlightened Economist

“Unofficial Britain is a mesmerising journey that manages to feel both strange, and deeply personal. Eminently readable, it left me looking at familiar places in new ways – and nostalgic too, for the liminal hang-outs of my own formative years. But most of all it’s a reminder that history is never truly buried: the best stories have a habit of clawing their way back up, through even the thickest tarmac.” – Darmon Richter, author of Chernobyl: A Stalkers’ Guide

His weird fiction and horror have been published in Best of British Fantasy 2019, An Invite to Eternity, This Dreaming Isle, The Shadow Booth: Vol. 2, Unthology 10 and The Lonely Crowd. His essays have appeared in Mount London, An Unreliable Guide to London and The Quietus.