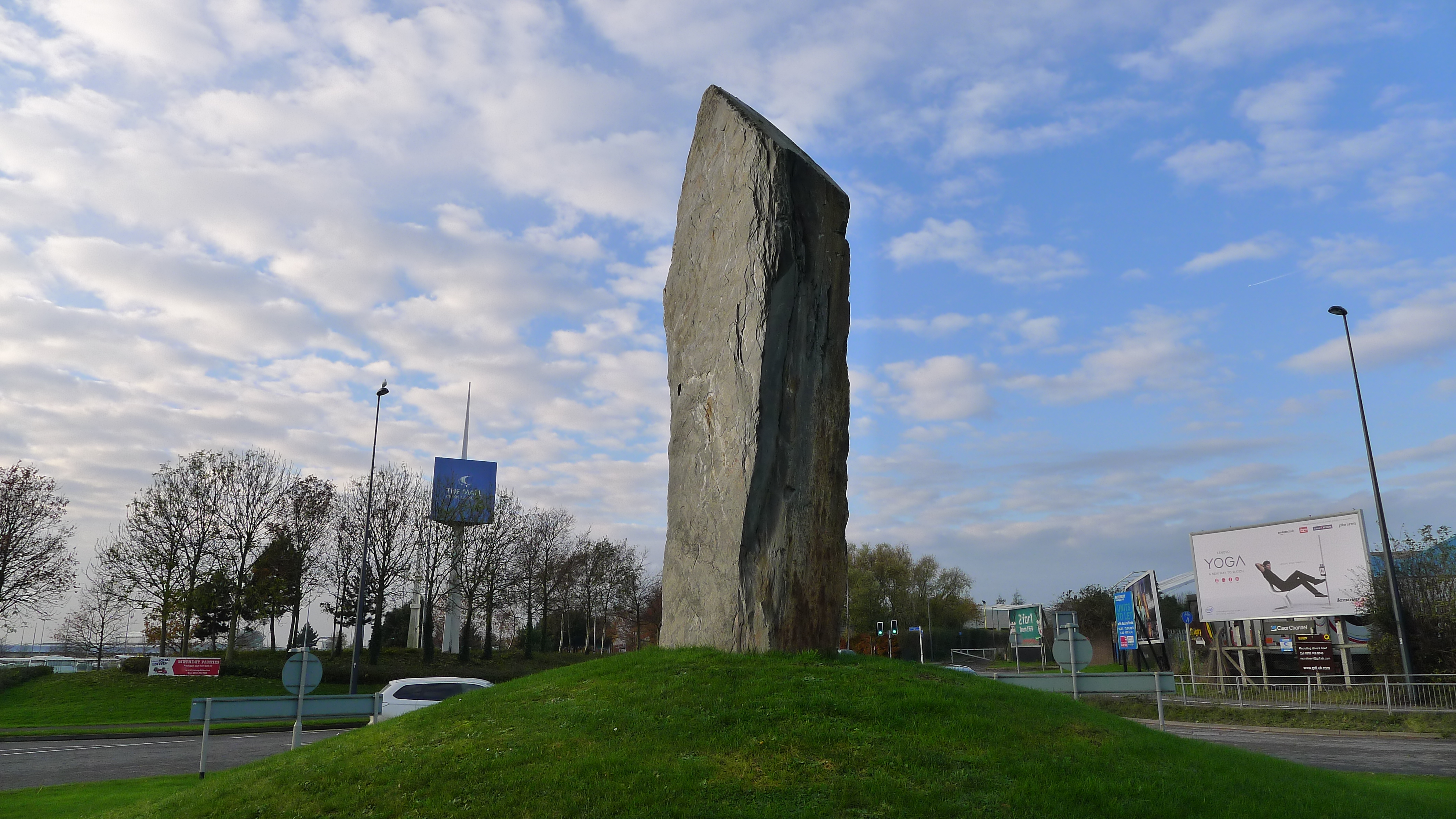 This is an extract from my new book Car Park Life, out now from Influx Press. ‘A retail park Heart of Darkness.’ – John Grindrod, author of Outskirts… ‘Both ludicrous and profoundly moral.’ – The Guardian

There’s something evangelical about this declaration on the Cribbs Causeway mall website.

The joy of parking spaces.

You know what they mean, too.

Oh, for it is the stuff of life to experience that sheer, unbridled joy of parking your car… and then to walk away without paying and know that it was one of 7,000 possible places you could have parked.

To me, it’s what Christmas is all about.

This is why, only a few minutes from Junction 17 of the M5, this free parking is one of the many reasons why Cribb’s Causeway is a great place to shop at this time of year.

But can you experience the joy of parking spaces without a car?

This is what I’m here to find out.

I take a train from London directly to Bristol Parkway. A cabbie drives me across the edge of the Severn Escarpment through the outer suburb of Patchway, Bristol’s overflow zone: bungalow and higher-rise overspill estates built in the mid-1960s.

The causeway was originally a Roman Road from a settlement called Portus Abonae (now known as Sea Mills), to Gloucester (Colonia Nervia Glevensium) which was a retirement town for aged legionaries. Before the Severn Bridge was opened in 1966 it was the main road to the Aust Ferry.

The legend goes that the name ‘Cribb’ comes from Tom Cribb, a bareknuckle boxer who hailed from the area. But the truth is that it was called Cribb before his birth in 1781. Some reason that the area was named after another family with that surname.

Less fun, but who cares. Ultimately, this trip is all about tarmac, and how it’s going to make me feel when I stride across it, car-less and free.

In the 1960s the Causeway became an A-road linked to the New Filton Bypass toward the A38. This became linked to the M5 motorway. In 1976 the go-ahead was given for a hypermarket to be built near the junction. Around this sprung up other stores – and their attendant car parking areas.

And so the Cribbs Causeway Retail Park was born.

Finally, in 1998 the Mall was opened: a giant, multi-floored block of high-end chain stores hunkered within a network of mini-roundabouts, car parks and trading zones, like a spider queen in her web.

I ask the cabbie to drop me off before we reach the entrance of the mall’s carpark. I am astonished find myself at a roundabout, in the centre of which is barrow-like mound, from looms a menhir, as monolithic and alien as the one in 2001 Space Odyssey.

Also Sprach Zarathustra strikes up in my brain as the sun slants above a cloud bank, catching the stone and turning it orange.

….into a brave new dawn of convenient parking.

Beyond the sign for Cribb’s Causeway Retail Park is what looks like an airport car park, zoned with letters, beyond which I can make out the lettering of Marks & Spencer on the side of the Mall.

I push over a hump of earth into H area. Between the zones are small trees and strips of cotoneasters, verdant with red berries. At their stumps snake loops of broken wires.

This outer zone is one of the additional parking areas, controlled by rusting barriers, stiffly raised. Out of use. Awaiting a time of crisis.

Two men chat outside a white van, parked near a silent, empty double decker bus. Shopping trolleys are tilted on the verge. Here’s a place where you can abandon things, or get down to some illicit dealings.  You can bet the security cameras are off or watching with no film – like observers with amnesia.

A car rumbles past. It’s a lost probe leaving the fringes of the solar system.

There are road signs for John Lewis and Marks & Spencer. I walk contrary to their suggested direction towards the far edge of zone H where green mounts rise from mini-roundabouts behind the car park’s wall. In an act of municipal topiary, tessellated shrubs have been sheared to create a bulbous, swelling effect.

I pass downstairs to the area behind M&S’s food hall. Above rows of shopping trolleys, signs tell ethical jokes:

Our coffee won’t leave a bitter taste in your mouth.
It’s Fairtrade.

There’s nothing woolly about out commitment
to animal welfare.

UM… I DON’T GET THIS ONE…. I MEAN…. I’D UNDERSTAND IF THEY SAID NOTHING WOOLLY ABOUT OUR COMMITMENT TO SHEEP …. THAT WOULD BE FINE…. BUT THE JOKE DOESN’T WORK WHEN APPLIED TO ALL ANIMALS BECAUSE MOST ANIMALS ARE NOT WOOLLY.

WHO WRITES THIS SHIT? MARK OR SPENCER?

Angrily, I pass some empty benches, overlooked by an advert for a retirement home, aimed at elderly people who might rest there.

Nice touch. Get them while they’re tired.

Then around the corner, a wonderful winter wonderland opens up….

I’m in a sculpted entrance park, furcated by a skinny ornamental canal lined with benches and water features, flowing to a tumbling fountain. There’s a princess palace, giant candy canes, a Bavarian Christmas market and an ice rink, from which blares a terrible cover version of The Pogues’ Fairy Tale of New York.

At the other side of the rink, spirals of steel and concrete lead into underground park and the truck delivery areas behind a row of cheap chain stores. Over the tops of warehouse roofs, petrol stations and roundabout sculptures I see the yellow lights of Morrisons in the far distance.

Where does this place end? It just goes on and on.

I’m awestruck by the vastness of this retail zone, spreading all the way to a distant hilly ridge. It’s like an ancient Mayan network. And if it were such a thing, the main temple would undoubtedly be The Mall: the central hub where the highest priests reign and the lights burn brightest across shimmering clean surfaces.

Separated across a concrete gully are Kiddicare and Halfords, sharing a building that looks like a Scandinavian church.

From here it all gets a little more ramshackle.

I step down into the Centaurus retail park on Centaurus road. I am now in an ancient circuit of the retail park, cheaper and shoddier, from a time before The Mall when life was simpler – but parking was much harder. Here’s where I find Currys, BQ, Morrisons, Asda, McDonalds and The Vue. They’re like quaint thatched villages in comparison to the Mall.

Each of the smaller retail zones has its own style of car park and its own microclimate. The shrubs are sparser, drier, shoddier than on the higher level. There’s no money for topiary, water features or Bavarian sausage shacks down here.

I could keep going, I expect, in endless loops all the way to a far ridge topped with woodland.

But I decide to stop. Because I know I’ve reached some form of destination. A natural punctuation mark. For I stand at another roundabout formed from a massive grassy cone topped with a metallic nipple.

This futuristic monolith is a companion piece to the standing stone at the opposite end of the park.

What function they serve, ceremonial or otherwise, I have no idea.

Perhaps they transmit messages between each other?

Perhaps they control the mood of all who pass through their field, preventing anarchy from destroying Cribb’s Causeway?

What I do know is that their location on busy roundabouts means that they are there to be viewed from a car passing at speed around them – never to be visited, never to be caressed by fleshy human hands. Never to be scrutinised up close.

So perhaps they are there purely to remind us that there are things about this car park we can never understand, and should never even try.