Deep in the Woods Where Ghost Dogs Prowl 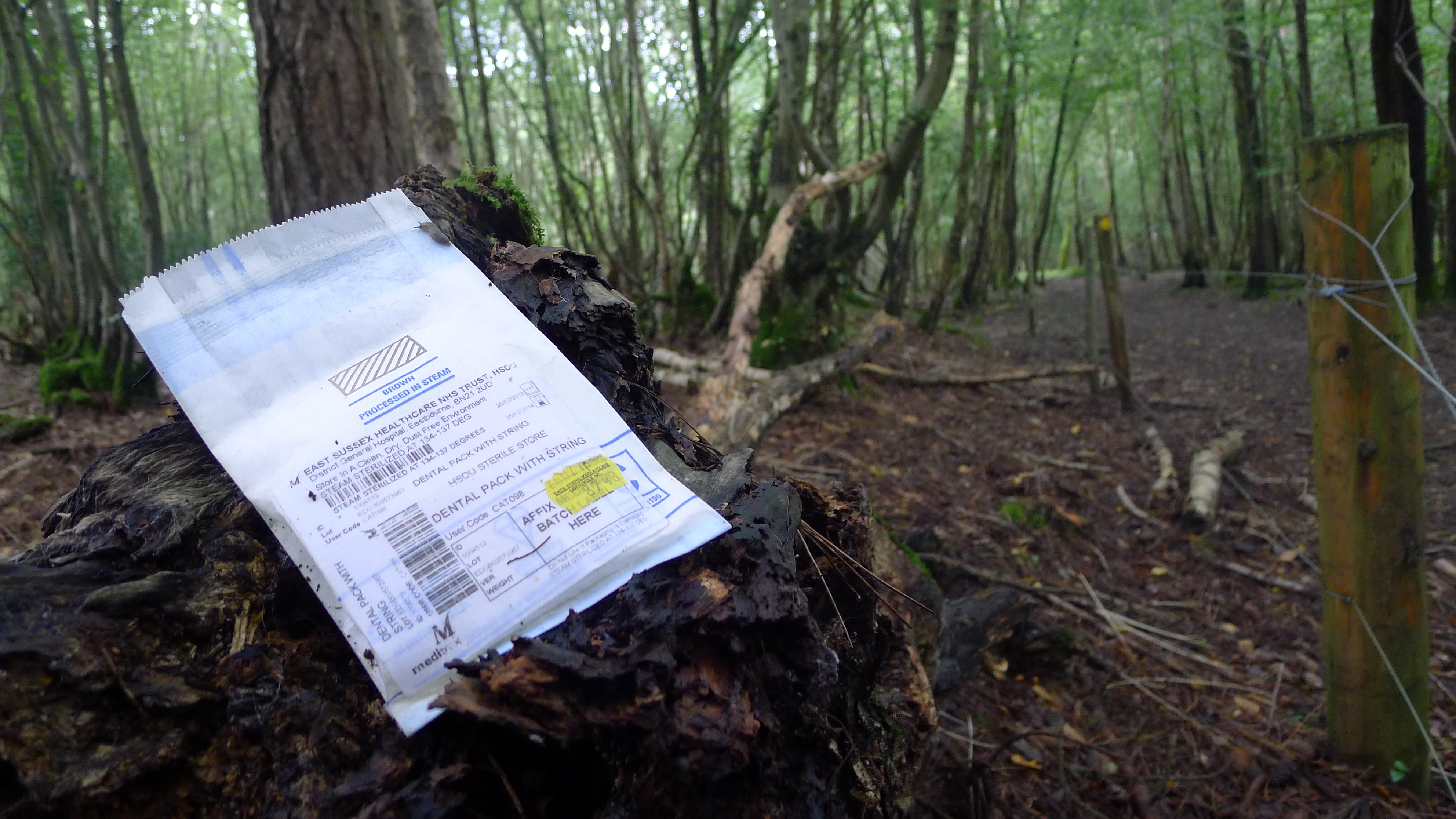 Deep in the Woods Where Ghost Dogs Prowl

Something big has been moving through these ancient woods.

On a dark slope, many of the trees are tilted and broken. Uprooted trunks like Gorgon faces.

My dog, Hendrix, is running ahead. My canary in case of danger. Alas it must be he who feels the tear of the phantom claw, the crunch of the bear trap, or the demon’s flame.

I see a possible cause. There are bivouacs everywhere. Scouts! A menace to our wilderness. Unless, of course, they’ve been introduced deliberately, like sheep, as an environmental control measure, destroying weaker trees so that the strong can grow.[1]

In a clearing by a stream, there’s a memorial bench:

Listen – you can still hear his voice in the trees and his laughter in the wind.

Beneath, a plaque reads: 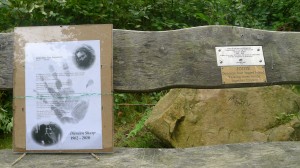 A poem is propped on the bench, ‘Gone but not forgotten’, written by his friend, Dave. A handprint behind the text is presumably Duncan’s, palm pressed against the frosted window between life and death.

At the top of some steps, a rusted pylon is the first of many in a line that arcs over a hill, along a corridor mown into the woodland.

Another memorial bench looks over this corridor. Seems like the humble pylon is now officially picturesque. I sympathise. I’m a sucker for a pylon. So I abandon the marked trail and follow them up the hill.

At the end of the corridor, a stile leads onto a swooping holloway. Roots jut from six foot slabs of moss. I’m intrigued by an opening into a dark area of wood strewn with car parts, plastic bags, beer cans and tubing.

Inside I find a sinister chaos of cracked trunks and split branches, trees angled across the path. Further in, a concrete hatch is visible under a loose covering of sticks. It looks like something a Lovecraftian protagonist would venture into. 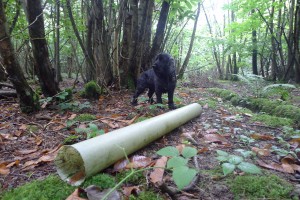 This wind rises. Is that Duncan Sharp’s voice in the trees? I pick up the pace.

Suddenly, inches in front of my eyeball – a spider. Before I’ve time to stop there’s sticky web on my face and I’m yelping like an idiot. As I claw the silk from my eyes, Hendrix goes racing into an patch of dead pines, their branches stripped of everything but a few rotten cones.

Then he stops. And he growls.

Hiding in the bushes is a dog – a black and white Border Collie. It’s alone. Waiting.

Hendrix is usually placid with strange dogs. He wants to smell some arse, then quickly move on. But he doesn’t like this one. He barks and snarls and refuses to go close.

Thinking of the plaque on the memorial bench, I wonder if this is ‘Jodie’.

For god’s sake be rational, Gareth! I urge myself. Think of how many memorial benches there are in these woods. This could be anyone’s ghost dog.

As Hendrix and I scuttle away, the dog steps out from the undergrowth and watches us. It’s still staring when I find the wooden cabin, isolated in trees, away from the path. Its windows are splattered with what could be mud or dried blood. 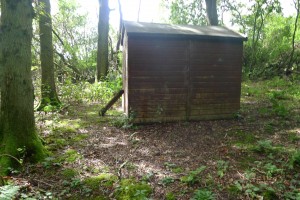 I check my phone. There’s no signal. Just like in the films.

I remove the post propping up the door. Inside: suitcase, chair, broken heater. Things in plastic bags. Everything coated in cobwebs. The stink of rotten wood and mould. Things dying and things growing.

When I re-emerge the ghost dog has gone.

Further ahead we enter dense, dank woodland where whole swathes of trees are collapsed, strewn across ditches and fences. On a severed tree stump I find a ‘Dental Pack’ from Eastbourne District General Hospital. As I take a photograph of it the air behind me trembles. Something thundering in the distance. 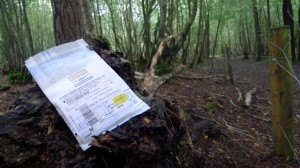 I look up to see movement in the trees, long brown limbs and fur moving at speed.

It’s pack of giant dogs… the ghost dogs of Brede! Given a new lease of afterlife by dedications on memorial benches!

For a second it hits me…

At last, I’ve made a genuine cryptozoological discovery. I’ll put this in a book and become famous! I’ll be on the shelves of WH Smiths and Morrisons! I’ll do Fortean talks up and down the country. I’ll get on This Morning!

Then it takes another second for my logical mind to realise that these animals are deer. By which time they’re gone, and I’m left in the woods with only a dental pack and a very-much-alive cocker spaniel.

For more  adventures in Brede High Woods, and more musings on Memorial Benches, read this.

[1]  This makes a weird kind of sense. According to Marouf Arif Hasian, “the most vocal supporters of the scout movement were also among the founding fathers of the British Eugenics movement.” As Caleb Saleeby wrote: “if national eugenics is ever to be achieved in Great Britain it will come through the Boy Scouts and the Girl Guides.” In 1911 Powell declared, “Our business is to….pass as many boys through our character factory as we possibly can”.