Archaeology Now (or What I found when I ...

Striking out on a bright Friday in March – I’ve got a job on with some archaeologists and I’m heading to the far side of the bypass to scope out the bronze age cemetery that half surrounds the town – it’s an old route this – Barton Street as was – tracks the edge of the Wolds up to the Humber – the first mile or so is properly Roman – straight as you like and wide with hazel and beech either side – a bit claggy under foot – pausing I can hear the water run off the fields to my left – like this sun has made the hill sweat – looking east is an industrial estate, a hospice a 24 hour garage with a Subway – beyond there – the outmarsh and the sea a few miles off but it’s too hazy over land to see that far today – I’m working out the lay of the land as I go – the path hits a little holloway with the ruins of an iron fence gradually rusting into the fresh nettles – so far so good – I’m in the swing of things now – the right setting for adjusting my thoughts to the past – good – the correct level of daydream as I imagine this slope covered in the ashes of 3000 year old locals – perhaps there was a grounds keeper in them days – keeping the place tidy and knowing who was buried where – the path opens out but my way is partially blocked by the smashed gable ends of a Wendy house and 12 black bags of house hold rubbish – I grumble and take note of the spot – I hit a very small road that leads over the hill to Acthorpe Top and on to Skeleton Hill (nothing happy ever happened on a hill called skeleton) a quick climb upwards with the road to the summit – good view for Lincolnshire and the site of the cemetery starts to make sense as I make scribbles and take a few photos – here at the top is an improvised layby – two mismatching wellies, rizla, large yoghurt bottle and the debris of a large meal from the famous Scottish restaurant – the nearest branch of the celebrated burger merchant is 13 miles north of here – I find this stuff everywhere – those spots caners pull up at – tins of Monster crushed into large Donald boxes and a scatter of fries like they were whittling a potato into some form of hand tool – Obviously litter gets bloody everywhere – particularly at the edge of a town – car born rubbish clinging to roadside plantings – like the rings of Saturn but made out of Costa jugs and the greased paper sack of Gregg – I’m distracted now as I march along north of Cow Pasture Wood and behind Skeleton Hill – there’s a barrow I stop and draw but at my feet two tins of Red Bull and the body of a munjac – Years ago I was walking this way and found a mass of porn here – you don’t see that these days – rural libraries of mucky mags – perhaps some evidence of the out of town virility cult – the car wankers – unloading their shame to the hedgerow – maybe the fast food litter is from the same people , no longer driving into the hills for an evening of self-abuse but now feasting on Whoppers and Rustlers and cans of energy – gulping away great gobs of Tuarine to invoke the spirit of the Horned Bull – and failing with a burp.

I’m looking for the bronze age but have found the new archaeology – one of laziness and shame and sticky fingers. 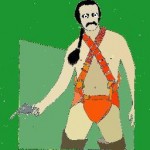 Maxim Peter Griffin is a landscape artist, cartographer and walker based in Lincolnshire.

You can read Unofficial Britain’s profile of the artist here: Wobbly Lincolnshire Landscapes