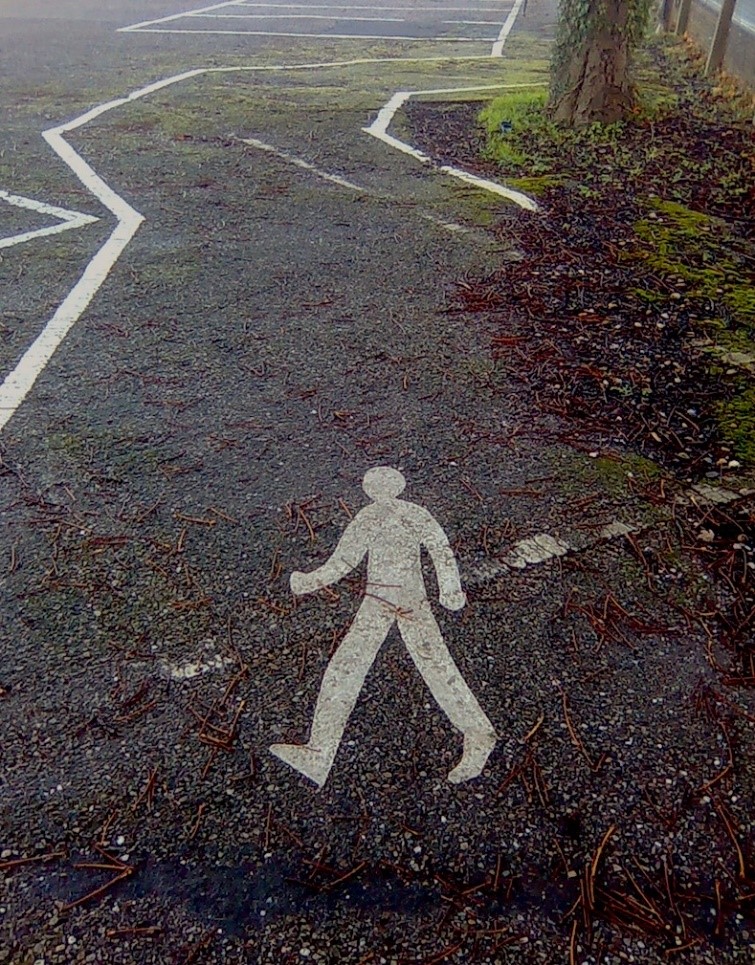 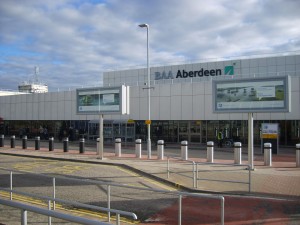 I’ve never been to Aberdeen’s airport before. I’ve seen all other public amenities of Aberdeen, harbour, train station, bus station, but not the airport.

It is very exciting. The names of the airport hotels at the feeder road: Speedbird Inn and Thistle.

The location: Fully integrated in the suburb Dyce, a 6000-people enclave of Aberdeen.

The speciality: Only one terminal for planes, but dozens for helicopters. Aberdeen is the place where oil turns into gold and people into oil rig operators.

The access roads are controlled by one main roundabout, which is not even round. It also pretends to have a stone circle in its centre. It’s not really a circle at all. Three rocks form an equilateral triangle, the rest of them are just thrown in for good measure.

Forties Road is named Forties Road because, I have no idea. The airport was bombed by the Germans in 1940, but that can’t possibly be of relevance here. Forties Road forms the western boundary of the airport. As such, it is also the boundary between two different worlds, airside to my right and landside to my left. Wide open yet inaccessible area here. Depots, offices, cargo, lots of stuff over there.

I ignore the stuff and focus on the spaces. Strictly speaking, the empty spaces to my right are not part of Scotland any more. Together with all airsides of all airports and with the insides of all planes they form a complicated spider-shaped superspace, a non-place, which envelops the entire planet and is protected by X-ray scanners.

Heliport after heliport, men with hard hats and ear muffs, thundering machines. I try to catch a closer look of the monsters, but I only get glimpses. And noise. Things that are definitely there, but elusive and untouchable, like stars, like politicians. 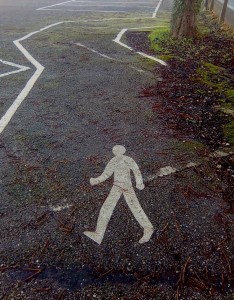 I turn around close to a mile from the terminal just after Hutton Road branches off, at the pre-arranged turn-around time. Like when climbing Mount Everest, it is important to know when to turn around. People die when they don’t turn around at the right time. Or they miss their plane or something like that.

Forties Road, by the way, is a dead end. I find this out much later when I retrace my steps on the map. I added a few more virtual steps.

It seems that airports themselves are not sure any more about their existential purpose. Some of them make more money from retail than from flying. FRA is a mall, ZRH a circus, and DUB a freaking world heritage site, with cycle paths and museum and church and all. Airports that look like airports are on the verge of extinction.

Aberdeen is one of these airport dodos. It actually smells of machine oil, not olive oil. The passengers of the airport bus are 90% male, and even the women have broad shoulders and walk very fast. No children. No elderly people. No stroller.

The problem with airports like Aberdeen, and, I suppose, all other airports is that we really don’t want to be there. We want to be somewhere else, and the airport is the stepping stone. We go to airports because we want to go to some form of utopian reality which we might refer to as vacations or adventure or family. The airport is the transitional limbo between reality and dream. We need the airport to maintain the illusion of the lonely island or the unspoilt wilderness or the human connection.

But the eschatological concept of a better place somewhere else is exactly what got us here in the first place. The idea of a place that is beautiful and pure and fulfilling has brought us a world that is filled with car parks and motorways and oil rigs.

The more we attach ourselves to the illusion of a better place, the more we give up the connection with these real places that surround us. Supermarkets. Gas stations. Public transport. And airports. These are the places we need to deal with. This is the world we have made. We are not some sort of counterpoint to the ugly, disfigured, industrialised world. We are part of that world and should behave like it. In the words of Liz Clayton: “Embrace blight! We have no other hope.”

Aleks Scholz is an author and astronomer based in St Andrews. His most recent publication is Lug, Ton und Kip (in German), a book about muddy mountains in Ireland. The long list of his astronomy columns runs under the label Lichtjahre spaeter (lightyears later).