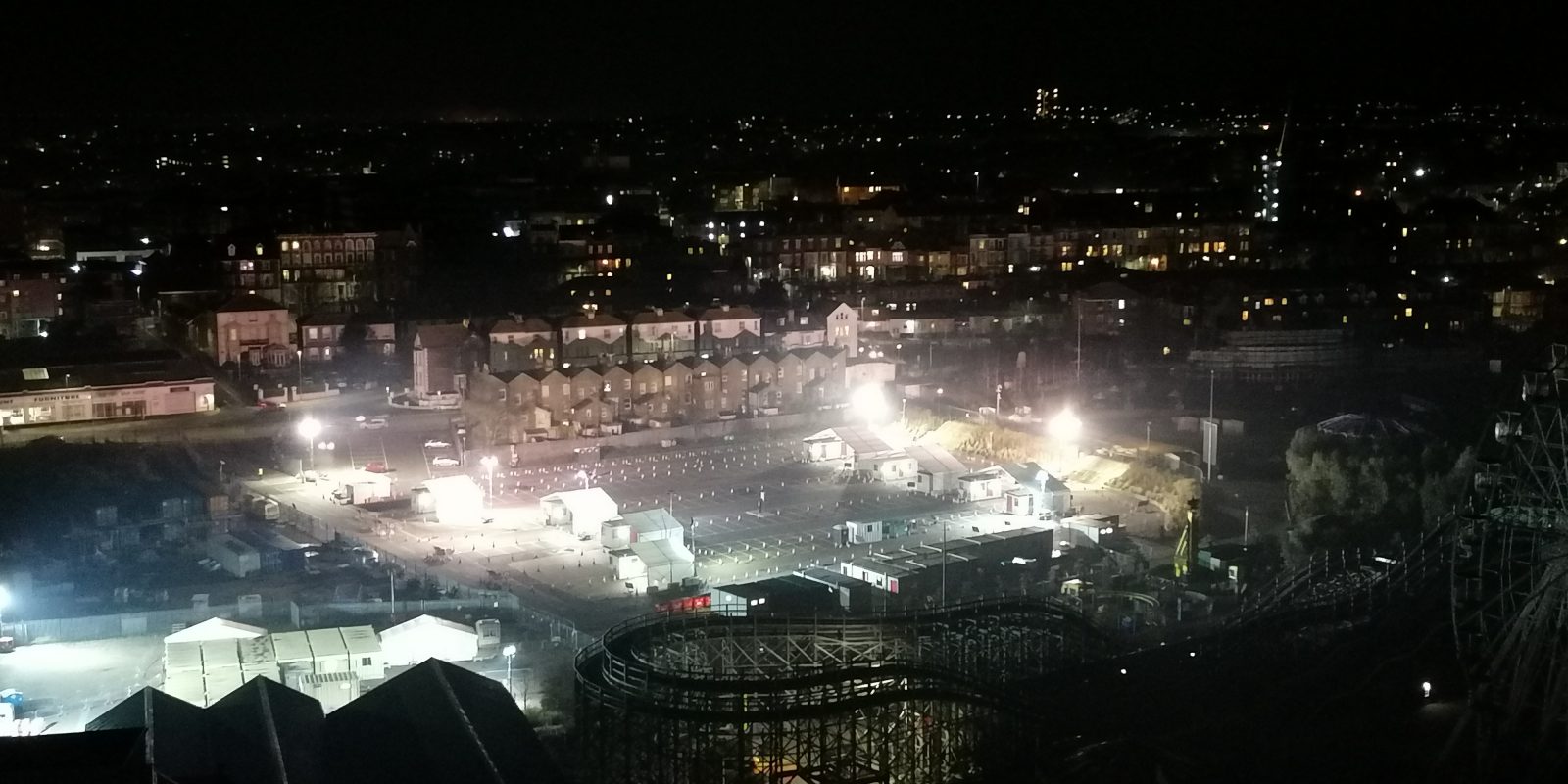 In Hollywood disaster movies, there’s always some guy who warns of a coming catastrophe.

Nobody listens to him. Not until the shit starts to hit the fan.

That’s the moment when dimwit authorities pull themselves together and begin grudgingly to work with him (it’s usually a him).

But you know that the situation is really serious when you see the white tents, filled with scientists in plastic goggles, masks and suits like crinkly, synthetic babygros.

White tents in a film means that things are bad.

That’s how I feel at the moment, looking out of my window in Margate. Because there are tents in the car park, right beneath my flat. I know I should start quaking but, to be honest, I am just weirded out.

As they say, truth is stranger than fiction.

It’s funny being in a seaside town during lockdown.

Everyone talks about how great it is, about how thankful they are. The whole nation is hankering to be where we are, apparently; to be by the coast, enjoying the sun and the sea air. But now it is winter and there is no more sun. The impassive sea goes in and out, heedless of human problems.

When I arrived it was early June, and the first lockdown was still in force. As I walked down the High Street, litter rolled around my feet, and steel shutters were pulled down over doors, like closed eyelids. I was in Margate to begin a new life, but staring into the grimy windows of Costa Coffee, I understood that there was little life to be had. Everything was on hold, including Beginnings.

As we edged into July however, hope swelled. More people began to emerge, to emerge and to linger; the concrete benches outside Poundland were occupied with scrawny teenagers, the crumpled tops of McDonalds’ bags scrunched in their fists.

The heat wave brought bucket-loads to the beach: one could scarcely make out the sand between the sunburn. Merry-makers jostled for space, drinking lager and breaching guidelines; should it be one metre or two, nobody seemed to know.

The authorities issued statements: You are not welcome here. It made no difference. The town was in its element. The streets were paved with fat golden discs: chips squashed by hundreds of feet into a vinegary mash. Cars filled the car park, shining like beetles in the sun: Margate was getting back on its feet. People looked – vaguely – happy.

But today the car park is filled with tents, and it’s like those few short weeks never happened. The people who came have gone away again, and everything’s being repurposed. The car park is now a dedicated Covid testing site.

Meanwhile, in nearby parts of Kent, another camp has been fashioned out of an army barracks. That camp has been created to serve as makeshift housing for the channel-crossing migrants this country is not gracious enough, or human enough, to properly welcome.

It appears that the disease and the migrants have each been given a ghetto of their own.

If one ever needs a reminder that one isn’t supposed to be going anywhere, let me tell you: a car park filled with tents does the job rather well.

No, we can’t go anywhere, and no one is coming here either. No one is coming to save this tourist town. It is lockdown mark-two, and everyone is at home.

In one restaurant window, I see a sign which has been left on: its scarlet LED bulbs flash on and off, sending the word ‘OPEN’ into the darkness like a strobing call of SOS.

Now people only come to the car park – testing site – if they’re in fear of death, or of spreading it. From my window, I watch red-and-white hazard tape snapping in the wind. The tape has been stretched between numerous traffic cones, and scores the once-empty space so that it looks like the long lines at the airport for immigration.

There never seem to be any people around – no one but the staff. That they’re staff is obvious: they are men in high-visibility jackets. The men stand around in small clusters of three or four, their gaits disconsolate, like limp teachers in the school playground chancing a sneaky fag break.

The car park occupies an odd patch of land: car parks usually do. It is bordered by Dreamland – a ‘traditional theme park’ whose Big Wheel I have never seen turn, and whose Scenic Railway is empty of carriages – and by a rubble-strewn back alley which stretches gutter-like behind Wetherspoons.

To another side, there is a rhombus of wasteland. This is strewn with scrap metal and old bottles; diapers languish between scrubby tufts of grass. There are also a couple of abandoned caravans, and several rusting shipping containers arranged in two storeys. A busy road runs along the final edge, home only to a large discount furniture showroom.

Once darkness falls, the tents are floodlit, like a football pitch, and their brilliantine radiance swells haughtily into the Margate nights. The bleaching glow overtakes Dreamland’s bold lettering, which is illuminated in juvenile yellow and underscored in naïve royal blue. The glow competes with the moon which, even when full, looks tired and sallow in comparison.

Each morning I wake and look out, and wonder at the tents’ curious positioning. It is too haphazard, I reflect – they look like heedless toys which come out to play under cover of darkness, toys which have put themselves back in their places too hastily. One has nosed that bit forwards, one has inched that bit back. The tents are not quite in line. They look giddy, slapdash; they are poorly arranged.

For some reason this bothers me.

Of course there’s no getting away from the incongruity of the sight. A testing site ought to be a stringently sanitised place, carefully isolated from the wider world, while car parks are big and dirty and open to all elements.

But perhaps, after all, it is appropriate that the virus is being tested in a car park. When we are travelling somewhere, the act of pulling up in a car park signals that we are there – and yet, not there. Not quite there.

Like a car park, lockdown is an interim, it is not a destination in itself. Or it ought not to be. We hope that it isn’t.

Now that it is winter, the roofs of the tents sparkle with frost. The pandemic is starting to feel like the waiting room of the future. Talk of vaccines is bandied about; so far, it is all just talk.

From my window, I look at the tents. In Hollywood, when the tents arrive, things are bad. But the film’s not done yet. Surely it is not done yet. Will the vaccine come? Will it work?

I look at the tents again; I watch them hold space. And I wait.

This is an edited extract from Emilia’s longer essay, ‘Of White Tents and Unwanted Things’, which you can read here.

Emilia Ong is a British writer, born in Hackney, London, in 1983 to an English father and Chinese-Malaysian mother. An ex-English teacher with a degree in philosophy, she’s working on her first novel. For more information about Emilia’s work, please take a look at her website, www.emiliaong.com Or follow her on Twitter: https://twitter.com/e_o_n_g_