Deeana Voilet goes deep into a folkloric subterranean world beneath the city of Sheffield which is more real than you might at first imagine. 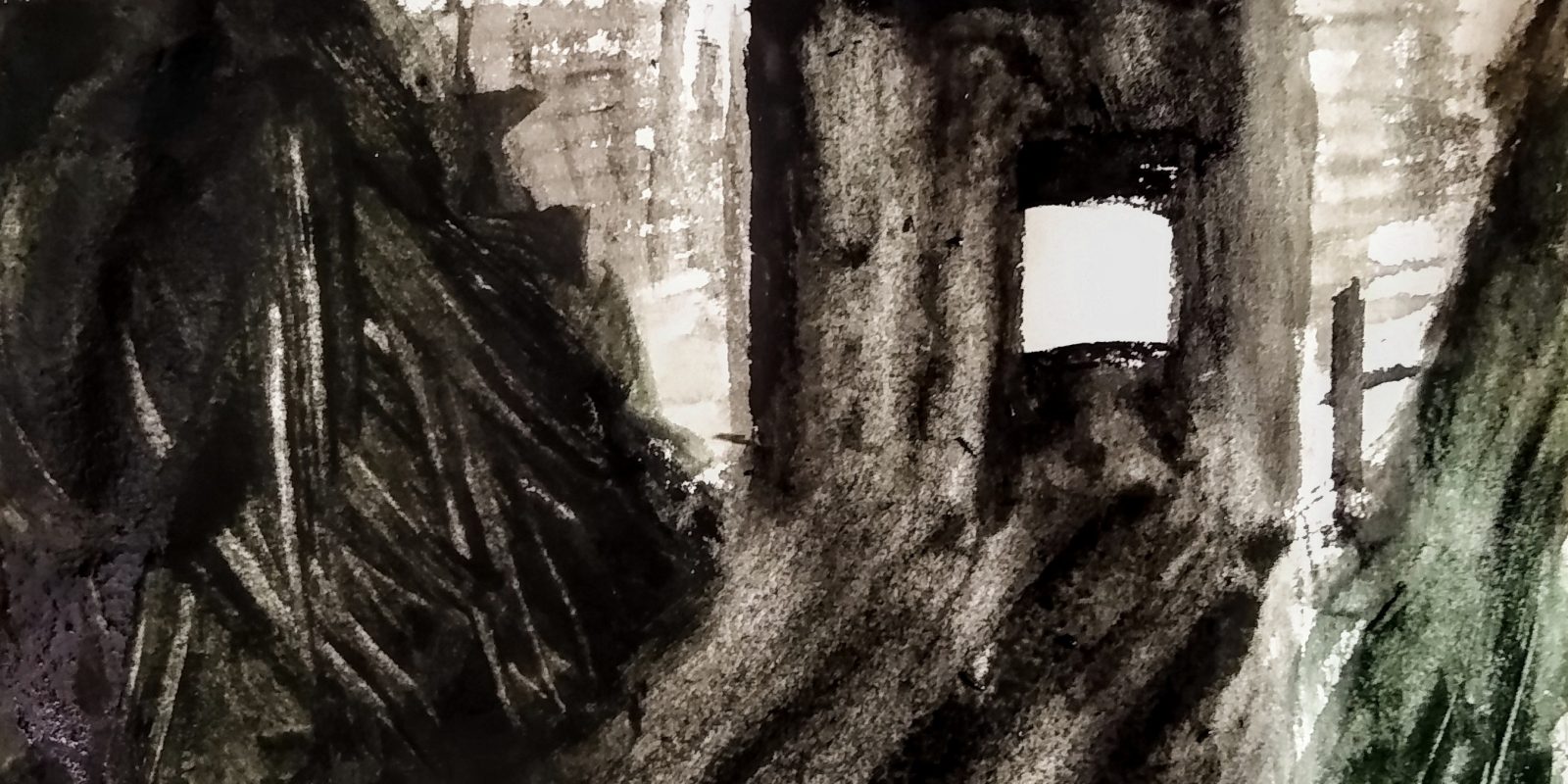 People keep telling me this when they visit for the first time.

They are quite right. It is the sky that I remember most clearly from childhood.

Two visual memories seem to dominate. A plain whitewash sky, a cloud layer so smooth it seems like paper.

And the other, a dirty orange one. The same smooth surface lit up by cheap sodium streetlamps.

Perhaps I am old enough to remember the light of steel furnaces adding to the burnt tone. I’m not sure, but it would fit.

Driving back at night, the orange glare was reassuring, reflecting off the cooling towers and bridges.

Always the clouds though! Why don’t I remember sunny blue skies?

This town is built around rain. Sometimes the rivers come out to claim it back.

I remember the last great flood, seeing the road tear open in front of me from the pressure of water coming up below.

We used to build tunnels here. It’s in our instincts to do so.

Sometimes that folklore escapes into reality when they turn up an archway in the foundations of a new building.

The tunnels are always there, except they officially aren’t, which is a bit of a laugh because you can see them if you know where to look.

Gargantuan Victorian drainage systems run in chambers underneath the city.

The entrances are there, if you know what fence to look over, which culvert to follow.

The air down there can be foul, above those irritable rivers that can change in an instant and sweep everything away.

There are legends too. Linking cellars and running to the old castle over ridiculous distances.

Everyone seems to know a story, though they are wearily explained as old sewers or bits of mining left over.

But if you ask, people will tell you about the dark chamber with the archway that ran on under the city streets, and the ghost stories attached to it.

You can ask me if you like, I was shown a hidden tunnel entrance deep below the city about twenty five years ago, and I’m sad to say I never explored further (I needed the job that I would have lost by doing so).

We built a huge network of tunnels in the late 60s and early 70s. They linked the shops. You could enter and leave through basements. The only one I’ve seen like it was in Kyoto, part of the station complex there in fact.

But this was very different to the bright and regulated centre over there.

This one was all about hiding from the rain.

That’s where you went, avoiding the traffic and the damp. Concrete running wet and smeared with millions of dark wet footprints.

In the centre, a huge dome open to the sky, to let everyone hurry under back into the tunnels, kiosks built into the walls, bright lights against dark patterns.

Ask anyone of a certain age and listen to them talk about it like a long lost home, even though it smelled a bit and you could get murdered at night.

When they built it, they cut through old tunnel routes. The people in the travel agents said that something walked through at night sometimes, following the path.

They filled the tunnels in. They blocked them up and if you wanted to stay out of the rain, you had to go to the mall out of town.

Anyone you talk to about this will tell you that nothing was ever the same again.

I hate useless nostalgia and the championing of the past just because it’s the past, but for once, this is true.

A forum post about looking over a security fence and seeing a thing like an inexplicable underground station, exposed for a few hours by building work…

A mysterious vault deep beneath the library building, itself covered in arcane and masonic symbols…

We’re still tunnelling, into myth and stories. Loving the sound of the rain while keeping dry.

Deanna Violet lives in Sheffield and it shows. She grew up listening to stories about the city’s secret past and got obsessed with its mysteries. Her dad once showed her how to turn street lights on, and her mum met a ghost on the stairs. You can read this full version of this post plus more of her work on her website, Crow Violets.