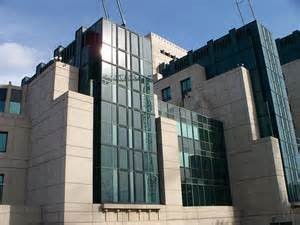 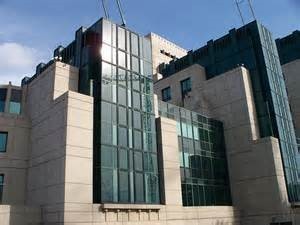 Terry Farrell’s MI6 building, aka 85 Vauxhall Cross, occupies a major traffic intersection beside the arterial A202 road over Vauxhall Bridge.

Such crossroads have long been renowned as places of decision-making and thus fatefulness. Speaking of the French poet Charles Baudelaire, Margery A. Evans in her study Baudelaire and Intertextuality: Poetry at the Crossroads (1993) addresses their significance, remarking that:

“It is tempting to read in Baudelaire’s metaphor of the ‘carrefour’, an implicit recognition of what we would nowadays term intertextuality and of the seamless continuity of world and text.”

But the mythological lode here is darker still, as gibbets were often erected at main crossroads: torsoes left to decompose as a grisly warning both to villains and passers-by who might be tempted by crime, the damned in other words.

A folk-belief attached and accreted itself to this practice, viz that the restless ghosts of hanged criminals would lose their way at such crossroads and wander endlessly in purgatory (the putative Ratcliffe Highway murderer John Williams, who committed suicide in the condemned cell, was buried in an unmarked grave at a crossroads, a wooden stake driven through his heart, vampire-like, as late as 1811).

Downriver the battlements at the southern end of London Bridge were traditionally used for a show of the severed heads of traitors or non-conformists, exhibited on pike-staffs that attracted red kites and crows to the scene, reminding the itinerant rogue or fortune hunter entering London’s walls of the perils awaiting them, and the price for misdemeanour and crime; so a type of tragic judicial theatre which Michel Foucault has called supplice, one differing from modern disciplinary space regulated by electronic surveillance and the threat of police interdiction.

Vauxhall Cross itself is actually a re-worked urban village that started as a residential proposal, thanks to the notorious Michael Heseltine-inspired Arunbridge competition for the re-development of Nine Elms.

Arunbridge Ltd, a company formed in 1979 by property wide-boy Ronnie Lyon (sometimes credited with the invention of the industrial estate), was an ambitious scheme to develop the 12 acre Vauxhall site comprising Effra, Nine Elms Cold Storage and the Green Giant, plans that quickly antagonised Lambeth council and ran into “…intractable planning difficulties” as Lyon’s obituarist put it, before the company went into voluntary liquidation in 1983 with debts of £8 million.

Farrell, a figure who has left his mark in a big way on the Thames waterfront, seems to have had a touch of compassion for future users of this bespoke office space, as Piers Gough noted in Alban Gate, Embankment Place, Vauxhall Cross (1993):

“It is important, then that Farrell’s concerns include consideration of the experience of the office workers in their environment –the advantages of views, terraces, conservatories and atriums, as enhancers of everyday life.”

Strangely though, no-one is ever actually seen taking advantage of these cool amenities, reinforcing the popular view that this bastion (during the English Civil war a Parliamentarian fort was erected nearby to defend London against Prince Rupert’s forces) is inhabited by phantoms, its raked structural design grandly conceited and wide open to mental projection and a rush of visual free association, whilst succinctly self-paraphrasing on all elevations, and also managing to recall the sites past glories.

Farrell himself has acknowledged that the severely clipped yew tree bushes at Vauxhall Cross are intended to evoke a highly formal 18th century pleasure park. At dusk the present day frontage becomes surreal and shadowy, unusual for a British building, its floodlit crowns and fountain garden conspiring to produce an enigmatic, and potentially filmic setting: the perfect poetic backdrop for a director such as Robert Hamer or Alain Resnais.

On the apron of the building, at the river’s edge, rubbish accumulates both next to the concrete ramp constantly in use by the yellow amphibian vehicle of Ducktours, and on the exposed sandy foreshore.

The London writer Will Self in his quirky story ‘Conversations with Ord’ from the collection Dr Mukti and Other tales of Woe (2004), refers to this rough beach as “a notch” and waxes lyrical about how he and a friend would build fires from driftwood, “…toasting marshmallows and staring moodily across the ruched brown river to the Tate Gallery”.

One hundred and fifty years earlier and he would have observed Millbank Penitentiary. Opened in 1821, and one of the most fatally theoretical constructions ever built, with pentagonal cell-blocks and Benthamite taskmaster towers, it occupied the site where Tate Britain stands today; but from 1842, despite the reforming aspirations of the prison, became a routine inspection and transit point for convicts being sent to Botany Bay. 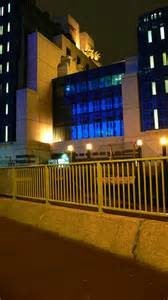 Today the MI6 building is a claustraphobic yet anodyne presence, a pre-cast concrete, sea-green triple-glazed űberpanopticon, squatting safely inside a Faraday cage, vaguely reminiscent of a kind of architectural vagina dentata (literally ‘toothed vagina’, a recurrent motif in the ‘Devouring Mother’ myth), from the way its twin lift towers frame a central bay window, meaning the littoral is a place for slightly nervous beachcombing rather than relaxation.

Not unexpectedly, CCTV surveillance is total, cameras tracking anything that moves. Does blurry archive footage still exists of the moment a rocket-propelled grenade, launched by the Real IRA (20 September 2000) smashed into the eighth floor, and broke a small window?

Head down, a few minutes spent picking over the area yields a dog’s jawbone, an orange buoyancy aid trademarked FREEFLOAT and a biroed message sealed in a squash bottle from two girls resident in Kungsbacka, Sweden, enthusing over their horses Harry, Chili and Paddy. Hardly top secret, but a form of drifting intel nevertheless.

The weathered foam in particular can be especially fetching, carved into seductive shapes, and often bored with holes as if reject maquettes for work-in-progress at the studios of Barbara Hepworth or Henry Moore, whose sculpture Locking Piece (1968) in fact sits immediately opposite on the north bank.

Mudlarks, or detectionists, give this beach a thorough going over as well, using metal-detectors in search of portable antiquities. They are a social group lauded by Tim Brennan in his polemical pamphlet The Curationist Manifesto (2003) for breaking the conservative mould of institutional archaeological practice and creating an “…antiquarian sub-culture”.

They ignore the menacing bulk of Vauxhall Cross, doubtless more paranoid about catching Weil’s disease from rats living in the covered sewer just upstream where the river Effra emerges as a trickle. Formerly one of the main tributaries that flowed into the Thames, the Effra (from the Old Welsh yfrid, meaning a torrent) rises in Norwood, continues via Brixton, once acting as a boundary line between the manors of Kennington and Vauxhall, and would have passed right under the site of the Vauxhall Pleasure Gardens.

In the Bronze Age this point beside Vauxhall Bridge was the tidal head of the river, possibly marked by a small eyot. The London Archaeologist (vol II, no.3, 2005) notes that “Episodes of Holocene transgression and regression have lead to complexes of alluvial silts and clays interspersed with episodes of local peat formation.”

So today even though the head of the tidal Thames has shifted upstream to Teddington Lock it seems apt to locate a globally-sensitive security installation here, where it can sift and sort information 24/7.

Who knows? Perhaps it was a technically minded spook staring out of an office window from ‘Legoland’ (as intelligence staff apparently call it) at the boulders strewn on the foreshore at low-tide which inspired the Russian smart rock spy story, the occasion for some cheesy tabloid headlines: The Sun gave us “Rubble Agents” with helpful diagrams showing how a dummy rock could be used as a dead drop to store and upload data, while The Daily Express managed “Spies Scandal that Rocked Britain” (both papers carried report and opinion, 24 January 2006). 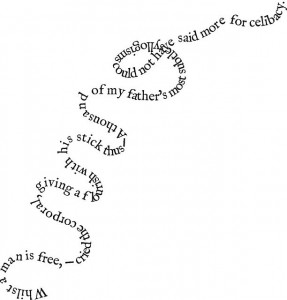 Impervious to current affairs, the Thames continues its Shandean squiggle (resembling the most famous doodle of them all, Corporal Trim’s arabesque in The Life and Opinions of Tristram Shandy (1759-67), across the capital, dark secrets buried in its muddy ooze.

Typically the site’s banal address: PO Box 1300, London SE1 1BD, gives little away about the building’s location, adjacent to a main bus and rail hub, an urban node and an agency listening to chatter, handling a network of overseas assets, its purview way beyond British heads so to speak, working tirelessly on our behalf, a secret intelligence component in the national defence system.

As such the building’s peculiar fusion of anonymity and contained flamboyance link it in style to massive inter-war Odeons, a nonchalant rhetorical style that seduces the public into both ignoring the facility’s presence, and never worry as they go about their business.

Nostalgic vestiges of empire find a fascinating yet bland encapsulation, a last hurrah, which of course has turned out not really to be the end of the show at all, but a musical intermission before the start of a much heavier 21st century script, with reconfigured Cold War tensions, and shadow of dirty terrorism after the World Trade Center atrocity.

These dangers provide the hard-to-challenge justification and driving force for new, intrusive legal powers such as control orders, domestic social engineering with the capacity to turn us all into suspects and snitches. 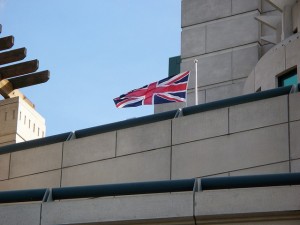 Territory too is now more than ever before homeland to effectively surveille and protect against a raft of economic migrants, traffickers, FSB assassins, and IS inspired lone wolf martyr bombers, reliable intelligence the first shield in what Richard Bilton has referred to as a “…capability war” (Who’s Watching Who? BBC2, 8 June 2009).

So, although Box is tasked to inform and shape foreign policy the building also stands as a visible memo to commuters that locally we are all enmeshed and embedded in a fluid global security situation, individual perception less and less the source of critical reflex or pleasure, but a relentless, co-optable intelligence gathering function, the basis of a massively expanded neighbourhood watch scheme. Spies ‘r’ us.

Life at the crossroads then, a Union Jack flag fluttering proudly on its pole in the evening sunshine, as the red double-deckers grind over Vauxhall Bridge crammed full of sweaty people, noses buried inThe Metro, the latest Tom Clancy novel or a sudoku puzzle.

Michael Hampton is an independent writer based in London. He has contributed to titles such as Art Monthly, Frieze, geschichte, Monika, The Penguin Collector’s Journal, /seconds, 3:AM and The White Review. His revisionist history of the artists’ book Unshelfmarked: reconceiving the artists’ book (ISBN 978 1 910010 06 8) is published by Uniformbooks www.uniformbooks.co.uk