Even though I was a complete stranger in this city, I knew where I was going. Or I could feel where I was being led.

It’s only when it moves out of sync that you begin to notice. A queasy wow and flutter in the stomach. Disorientation. You walk a fraction of a beat behind your feet. Out of phase, out of time, out of place?

I board a bus close to the grey behemoth of concrete, cladding and glass and head out in the opposite direction to the cars and buses mainlining into the city centre. Looking down from the top deck, a canal boat threads its way through inky black water underneath the bridge.

Picking up speed, the bus escapes from the city’s gravity and the signs on the arterial route shout out: Walkabout, O’Neill’s Irish Pub, Novotel, Jurys Inn, Sainsbury’s … Cineworld, Nandos … pizza, kebab. It could be any other similar road. Worlds packaged and branded, collapsed into words.

But where to get off? The signal is getting stronger and I’m reminded of that animated film about the Iron Giant.  All of his body parts, scattered around the globe, picking up the transmission. Off they go, even the nuts and bolts, reeled in to re-assemble the whole.

Flutter and wow and there is  a noticeable weakening of the signal as the bus passes a road heading off to the right. At the next bus stop I get off. It is easy to pick up the transmission once again and I head down the promisingly named Monument Road.

It soon becomes all too clear, that there is nothing obviously monumental about this area. It is predominantly residential housing, built, I would guess, in the late 1960s. There is a small parade of shops. Most are closed and boarded up.  Monument Wines and OHIVA Boutique & Beauty appear to be open, although it is difficult to tell. S&A Stores looks more inviting with boxes of apples, oranges and other more exotic looking fruits and vegetables outside. I have no need of any shops at the moment.

I can feel that I  am getting close and imagine that I can already hear the clocks but it is only when I reach the car park of the Karis Medical Centre and Noor Pharmacy that I see the Tower. Surely this must be the place?

The door is open when I arrive at the base of the Tower.

I begin to climb up the narrow, spiral staircase. Up and around, the shallow stairs. I pause to look down at the dizzying vortex. Wow and flutter, wooziness. Tick tock, tick tock.

It feels so close now but there is nothing in the first room. Paint is peeling off the walls. Some trees can be seen through the window.

Up some more stairs and on the next landing, another room:

It is easy to identify the one. My one. I only need to listen for the glitched beat of the rhythmic hum.

I reach out my thumb and place it gently on the rotating red hand. Holding it there for a split-second, I release the pressure and like a heartbeat, the device continues to tick its steady rhythm. My body relaxes as I stand for a few minutes and listen to the sound of the room.  A satisfactory adjustment. An aligned equilibrium.

I leave the tower and notice the lush green leaves swaying on the trees. A blackbird sings its heart out and the sky is clear and blue. I stop at S&A Stores to buy the reddest apple I can find. It tastes sweet and delicious as I walk back towards the city. 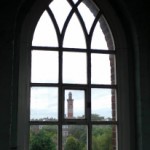 The Tower in this short story is Perrott’s Folly which is located in Edgbaston Birmingham. Also known as The Monument or The Observatory, the tower is 29 metres tall and was built by John Perrott in 1758. Now sitting rather incongruously in a 1960s residential housing estate, the folly, along with the nearby Edgbaston Waterworks Tower are believed to have been the inspiration for the two towers from J.R.R. Tolkien’s Lord of the Rings. Tolkien lived close-by as a child and walked past the two towers each day on his way to school.

The photographs taken inside the tower are of an installation called The Tower of Time by Yukio Fujimoto. This ran from 4 June – 26 July 2009, in conjunction with Ikon Gallery, Birmingham.