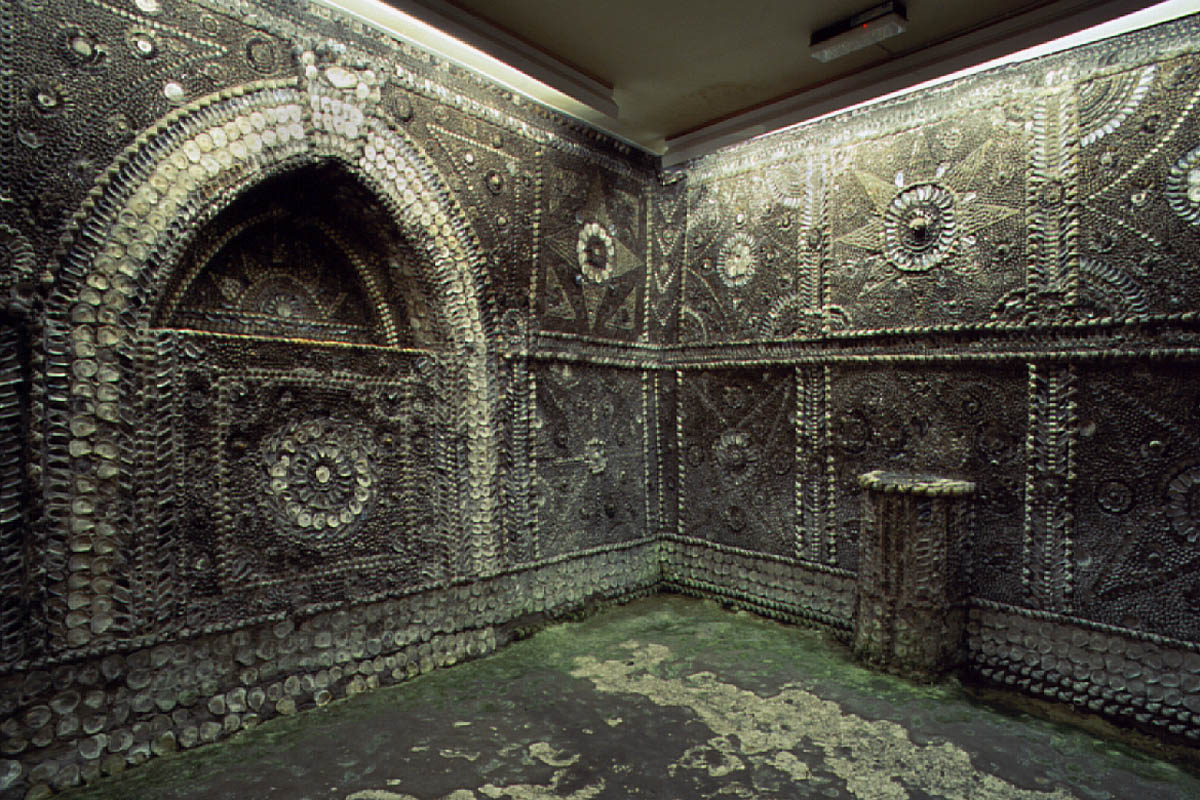 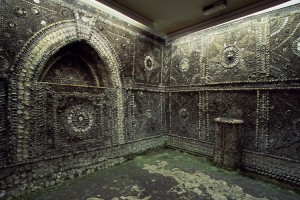 The Shell Grotto (or Shell Temple as its sometimes known) is a subterranean passageway in Margate, Kent, discovered in 1835 and opened to the public in 1838. Its provenance is unknown, its age a mystery, allegedly discovered by a man digging a duck pond. Time Out have gone as far to name the place ‘Shellhenge’.

There are no stories mentioning it before the nineteenth century; it features on no ancient maps.

Margate is a gift to the lazy writer-walker, presenting a tick list that would please any self-respecting psychogeographer. End-of-the-line feel? Check. New art rubbing against old heritage? Check. Literary and artistic connections? You’ve got T.S. Eliot, Turner and Tracey Emin. Modern ruins? Yes, of course, everyone knows about Dreamland. Music? Chas and Dave, skinhead, punks, bikers. The Shell Grotto is one more pleasing and enigmatic addition to this list.

Roughly two and a half metres high and 21 metres in length, dividing at the end to circle a huge rotunda, the place positively begs for speculation. According to Kent’s Strangest Tales by Martin Latham:

The whole temple is carved out of chalk and its walls are decorated with four million shells, arranged in a mind-boggling array of sacred symbols. Only Christianity seems to be excluded. Iris, Osiris Dionysus, the Tree of Life, owls, turtles and Ganesha the Indian elephant god adorn the tunnel as you travel to the central chamber, which is decorated with the sun and moon. Pythagorean geometry, classical symbolism, a pentagram, the Lotus and Kabbalistic numbering have allegedly been discovered in the complex shell patterns.

I guess the visitor can see what they want in the swirling shell patterns. I feel Terrence Malick would be the man to make a film about the place. The Tree of Life meets British social-realism. Ray Winstone decoding the Sephirot in Margate? I like that idea. 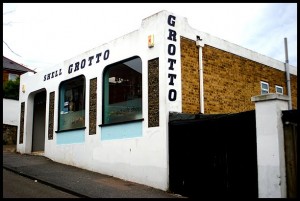 Others speculate the temple was built by the Knights Templar (though then, surely, Christian imagery would be present). The Freemasons have been mentioned. So far, the usual suspects, but others have gone further, suggesting the patterns are coherent with that of the ancient Phoenicians, suggesting a correlation with the Isle of Thanet and the Phoenician goddess Tanit. The idea of people of antiquity sailing up the Wantsum Channel to build an inscrutable place of worship does capture the imagination. And, of course, some have suggested it was built to house the Ark of the Covenant.

The truth, of course, is that no one knows. England is an old country, and Kent, with its proximity to the continent has come into contact with many different cultures over the millennia. Strange vestiges of pre-Christianity can be found in many parts of the county; for example, in Stone-in-Oxney on the Romney Marsh sits a Roman altar dedicated to the Persian God Mithras. Stories circulate about child-sacrifice in the ruins at Reculver. Parts of Viking ships are pulled from salty mud.

And the Shell Grotto is real – someone did build it, for a reason, and I’m glad we’ll never know why.

The grotto remains in private ownership but is open to the public and is a popular tourist draw. It boasts a gift shop and café, a tasteful website with a Flickr account and helpful hints on how to plan your visit. The website’s potted history of the grotto ends with this apt quote from the book Far From the Sodding Crowd: More Uncommonly British Days Out:

‘In the next six months, unless your soul is utterly dead, you will have a dream set here.’