The Humanoid Landscape – Whitstable and the gog/magog labyrinth 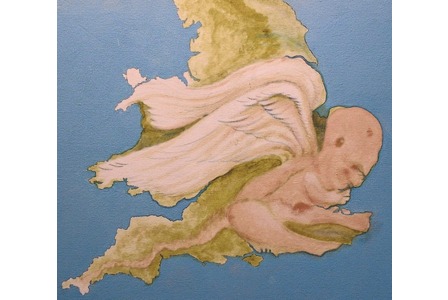 The Humanoid Landscape – Whitstable an ... 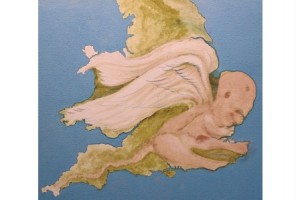 The oddest entry I’ve come across in the nebulous genre of landscape writing/psychogeography/white blokes walking around taking notes, has to be The Humanoid Landscape by astrologer, ex-environmental campaigner and Whitstable native Fen Lander.

His website declares: ‘After 6 years living in a garden shed, the oakman Fen Lander emerges with his new book The Humanoid Landscape, “A sensation for the totaly [sic] out of this world” which will surely excite the fervent mind.’

The blurb explains it better than I could:

Fen Lander has uncovered something strange – weird even – within the landscape of the Isles Of The Gods, that is, the British Isles . . .

A massive winged, horned, be-tailed cherub, angel, humanoid, that no one sees or has seen for two thousand years. According to the author, the name of every settlement, hamlet, village, town and city in England and Wales can be – is meant to be – read like a physiological diagram.

I don’t really understand what this book is about, but it made me very happy to discover such eccentricity in the town I grew up in, and that Whitstable could provide the key for someone to decipher the gog/magog labyrinth that had obviously been bugging them.

Fen expounds on a lot of the ideas of his theory here:

Gary Budden is co-founder of independent publisher Influx Press and assistant fiction editor at Ambit magazine. He lives in London. You can read more by Gary on his blog, New Lexicons.