The Fate of England’s ‘Infant Hercules’ 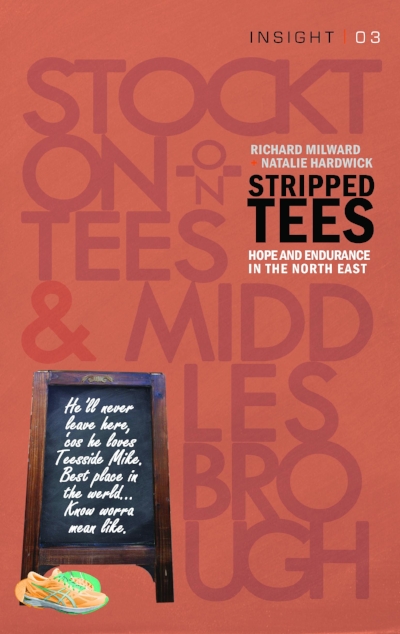 A review of Stripped Tees: Endurance and Hope in the North East by Richard Milward and Natalie Hardwick [Influx Press, 2016]

“This remarkable place, the youngest child of England’s enterprise, is an infant, but if an infant, an infant Hercules”  – William Gladstone

Speaking in 1862, the Victorian minister William Gladstone was witnessing Middlesbrough, and the whole Teesside area, during a remarkable time: the blast furnaces were raging, mills whirring and the people prospering thanks to the industrial revolution. But this boom wouldn’t last and present-day Teesside is still struggling to recover from the steady decline of industry over the decades. The latest blow came only last year when the SSI steelworks were mothballed and over 2,000 jobs were lost.

You only have to walk through some areas or pore over government statistics to see that the whole Teesside area is finding it hard to pick up the pieces. And all these pieces – the physical scares of industry; the outside political forces that arguably forced the area to its knees; and the unyielding determination and character of Teessiders – are thoroughly examined and picked apart in the two essays of Stripped Tees: Endurance and Hope in the North East to explore the area’s identity in full. 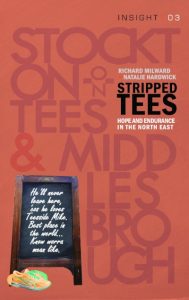 In the first essay, ‘A Town of Two Halves: The Revival of Stockton-On-Tees’, Natalie Hardwick takes us on a tour of her native Stockton, to local landmarks including the ‘characterless out of town retail park’ Teesside Park and a number of central venues such as the highbrow Arc and long-gone Dovecot. She also writes about the nights out on the town’s remarkably resilient bar scene, dipping into her parent’s past, when winkle picker wearing revellers were tempted onto the dancefloor with a local DJ’s taunts of ‘don’t be shy – your mother wasn’t’, before revisiting her own fond memories of nights out fuelled by 10p shots and remedied by early morning parmos.

From Hardwick’s essay, it’s clear that one of Stockton’s resounding successes is its lively nightlife, refusing to falter even in the face of the many adversities brought about by a failing industry. The area’s roaring pub scene, despite the punters’ fairly empty pockets, is testament to the area’s character. All good pub scenes need characters full of wit and humour, and these characters along with others from the Teesside estates are brought alive in Richard Milward’s essay, ‘Hello, Goodbye: The Life, Death & Rebirth of Grove Hill’, which focuses on the decline of Middlesbrough’s Grove Hill estate.

Milward brings together stories from his life on one of the Middlesbrough’s most downtrodden areas, half of which has now been levelled by the council. From the boy racer pulling over just to tell Milward that his bright yellow Asic trainers are shite, to the various miscreants, ravers and down-and-outs who mill around a former Kwik Save block opposite his flat. Milward paints his fellow residents of Grove Hill – and Teessiders in general – as colourful characters who make the best of a bad situation, having clung on to their jocularity and hard-headed nature. He doesn’t go easy on his hometown though – comparing his love for it to that felt towards a ‘temperamental uncle – and is quick to flag up the bad points along with the good. But it’s very clear just how proud he and his fellow residents are of their town, regardless of continual tabloid slurs and damning reports

The one theme that quietly bubbles away below the surface of each essay is the pride that the writers feel for their hometowns. A pride that they share with all the other characters that pop up throughout their anecdotes and tales from Teesside. This doesn’t mean that the essays are overly sentimental and rose-tinted though, as both writers tackle the area’s problems head on. At one point Hardwick even tries to reconcile this pride with the resentment she’s experienced for ‘[being] born into an area with no nearby cities, an oft-Baltic climate, tattered heritage, little visible wealth and few opportunities for work and/or play’. Neither writer air-brushes the various economic and social issues in the area, especially those that often make it into national newspapers or onto poverty porn reality TV.

Middlesbrough’s ‘Infant Hercules’ moniker may not ring true for the ruling classes anymore since the mills and steelworks closed their doors, but the essays show that this determined spirit still lives on in the Teesside towns. It’s still there, encapsulated by locals’ ongoing resilience and self-respect. Life forges on in Teesside, just as the blast furnaces once used to, and as both essays in Stripped Tees show, the locals will continue to make the most of their corner of the North East, no matter what hand it may be dealt.

Stripped Tees: Endurance and Hope in the North East is available to download on Influx Press’s website. 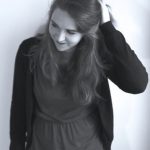 Laura is based in North Yorkshire and writes about travel and culture. She blogs about The North at northquarters.com and tweets at @lauramaryharker