The extraordinary thing I discovered in a Plymouth car park 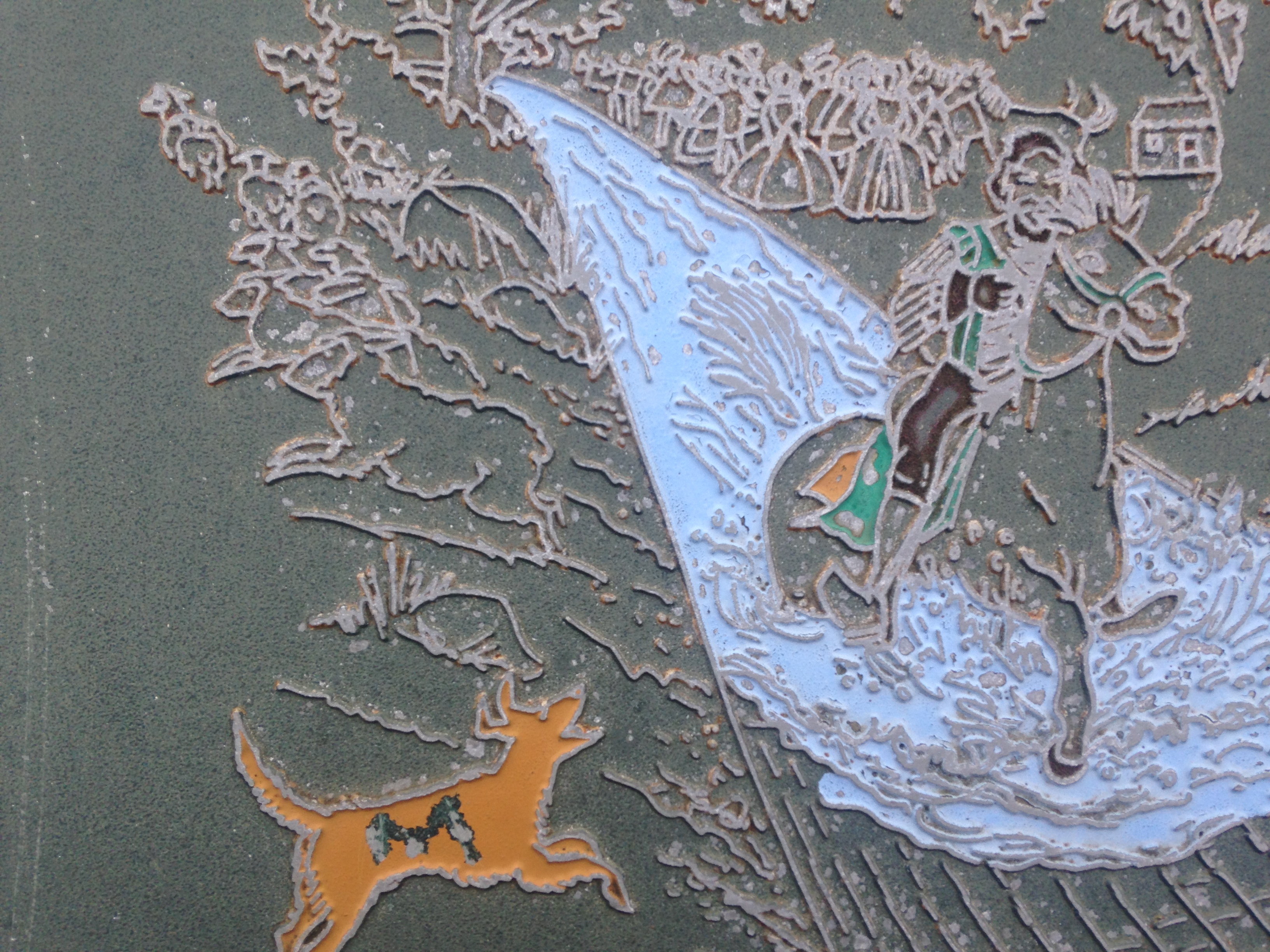 The extraordinary thing I discovered in ...

This is an early version of a chapter that appears my new book Car Park Life, out now from Influx Press.

‘Both ludicrous and profoundly moral.’ – The Guardian

‘Extraordinary. I loved it, and will never take my Asda car park for granted again.’ – Angela Barnes, Radio 4’s The News Quiz

The Crownhill Retail Park is on the road into Plymouth from Tavistock, via Dartmoor. My friend, Professor Dan Maudlin, is an architectural historian who lives in the area.

He’s been to the B&Q in the Crownhill Retail Park many times but, in his hurry to buy paint, never noticed the secret beneath his feet.

It was his inquisitive 4 year old daughter, Hester, who stumbled upon what Dan thought at first glance was a dried river bed running through the car park. Knowing my predilection for supermarket car parks, Dan promised to take me there next time I visited.

“You might be disappointed with the river bed,” he warned as we approached.

Thing is, I’m rarely disappointed with a car park. There’s always something. Always.

But this car park surpassed all my expectations.

We parked at the nearby council offices and walked into the car park via the “NO PEDESTRIANS” entrance between M&S and B&Q. Impatient incoming cars forced us into the tall pampas grasses lining the verge.

The car park is in the lee of a Fort built in the 1860s to defend Plymouth from French attack, and was only decommissioned in 1986 (more details here). The steep green ramparts loomed behind us as we crossed the entrance of a gargantuan B&Q, monstrous in scope, and kept going until we hit a gabion, packed with rubble to form the far wall.

Tracking along the gabion, we found a weird metal object with brushes underneath, perhaps some car park scrubbing machine to be attached beneath a truck.

Next, a graveyard of rusting B&Q trolleys, tagged with ‘SCRAPPED’ labels, linked by rusty chains, with an anomalous Somerfield trolley tossed in to date the mound. Somerfield hasn’t existed as a brand name since 2011.

This is the B&Q hinterland…

All around us there were black tyre skid marks from late night joyride donuts, and scraps of cardboard. Aside from a couple of skips there was only one car parked here.

Most likely one of those.

We walked on the grass alongside the perimeter hedge, heading towards Pizza Hut.

I don’t know, but I like them. And I hate it that newcomers like Lidl don’t bother with surrounding their car parks with vegetation.

And here I will make a prediction:

One day we will look back on the car parks of Tesco, Sainsbury’s and Morrison’s with a strange, sentimental yearning….

With their benches, cigarette bins, hedgerows, maps and tourist information boards, they have gone some way to supplant that role performed by parish churches and village halls, which were once a town community’s centre. But now that style of car park is under threat from budget challengers who dispense of all frippery and turn their car parks into barren office block car lots.

As I say, I’m rarely disappointed with a car park walk.

At the back of Pizza Hut the hedge was lined with rat traps and strewn with streamers of toilet roll. At the back door, two chairs were angled towards each other. Ghosts of dead gossip in fag breaks long gone.

Next door, KFC was closed while the car park is resurfaced. At the drive Thru bay window, “Pick Up Here” signs pointed at a wheelie bin.

To reach M&S, we crossed a dainty wooden footbridge over what appeared to be a dried stream, long and straight, full of pebbles. It ran right up through the centre of the car park, between KFC and B&Q.

But when we clambered over the fence it became clear that this was no river. The channel was straight, like a modern water feature with rusting outflow hatches, yet lined on either side with old stone.

As we got close to the centre of the car park, Dan and I were forced up from the dried channel. There we found our answer on metal tourist panels.

Quite frankly, I was gobsmacked.

In car park exploration terms, this was the money shot.

This waterway was the remains of a Leat, created by Sir Francis Drake in 1589 to bring fresh water into Plymouth from Dartmoor.

At the opening ceremony, it is said that Drake surfed the gush of incoming water on his horse.

Why? Because that’s the kind of guy he was.

Over the decades, the Leat gradually became clogged and polluted. So it was lined in stone in the 18th Century, forming the channel Dan and I had just walked.

In 1911, a reservoir was built here. We could see the remnants only metres away: a large fountain surrounded by a stone ring.

It looked like a piece of modern public art, but this was the reservoir’s aerator, now surrounded by fag butt bins. But it didn’t seem as if many people ever sat here. The fountain and the leat form the centrepiece of this car park network, but few people notice them.

It makes sense, really. Nobody ever decides to wander into the centre of a car park purely to get a sense of the vista. Why should they? They are here to get tiles, buy drugs, or pick up a Meat Feast.

And so Sir Francis Drake’s Leat remains a piece of vital architectural history hidden in plain sight beneath B&Q, KFC and M&S, unseen, unloved and breathtaking.