On an ill-fated supermarket car park walk during the pandemic, Gareth E. Rees ends up stalking the undead beside an abandoned roundabout 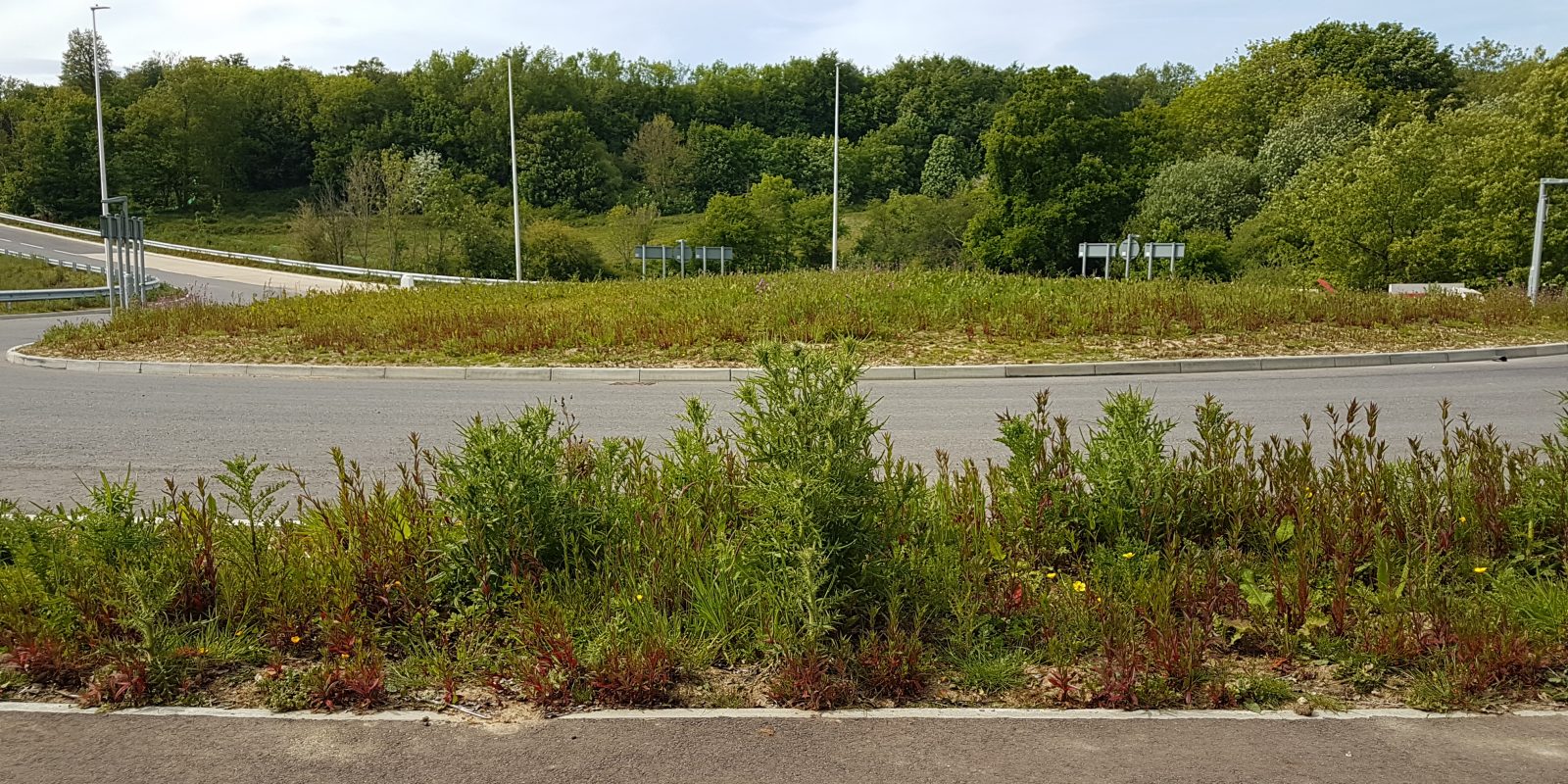 The Eerie Tale of the Zombie Junction Be ...

At the end of Lockdown#1, I ventured out to a supermarket for the first time.

St Leonards Sainsbury’s is on the busy A21 where it leaves town, nestled among a petrol station, McDonalds, Premier Inn and Toyota showroom.

The expected retail outliers on the urban edge.

We parked up but I didn’t go inside the supermarket. Too much plague for me.

Instead, my girlfriend went in, all masked up like a bandit, while I took a walk around the car park.

My book Car Park Life had come out six months prior. It was all about my adventures walking through Britain’s retail car parks.

But I’d not touched a car park since.

I’ll be frank with you – I was absolutely sick of car parks.

So I got really, really bored of walking around this one.

“I AM DONE WITH THIS,” I said, in my mind, to nobody in particular.

“BOLLOCKS”, I thought, as I looked at a bollard.

“THERE IS NOTHING LEFT TO SAY”, I yelled at a discarded Coke can in a trolley bay. “I AM A SPENT FORCE”.

As I returned to the store front, I noticed that they’d created a buffer zone of inverted trolleys, lined up in rows, like a skeleton army ready to attack.

Not good, but new.

Maybe I wasn’t done with car parks yet.

It had a nice ring to it. Better than…

Beside the cash machines, Roley the Steamroller looked visibly distressed by Bob the Builder’s early return to work – particularly as he wasn’t wearing PPE.

Beyond this tense scene was an alleyway. It ran alongside the store, by some rat traps and discarded shopping baskets, where it met a muddy slope.

Curious to see where it led, I ascended towards a woodland, where I followed a footpath through the trees, then out into open ground.

As I emerged, blinking in the sunlight, I found myself somewhere else entirely.

Before me was an abandoned road junction, consisting of an overgrown roundabout with truncated access roads that led to nowhere.

Round and round went nothing.

Nothing, with nowhere to go.

It was as if I’d walked into a Lockdown metaphor…

….the fevered memories of a moribund psychogeographer on his sick bed.

Sloping embankments to either side of the roundabout were weedy and green, dotted with yellow flowers. Tall weeds sprouted along verges of sun-baked mud, littered with energy drink cans.

Then, suddenly, I saw movement.

A shivering of leaves down below, where the scrubland met the trees.

Very slowly, a middle aged woman crawled on her hands and knees out of the undergrowth.

She got to her feet, rubbed herself down, then began shambling down the path, like a zombie.

Moments later, another woman appeared on the path, and began following at a consistent distance, never catching up.

Soon they both vanished around a corner.

Where could they possibly be going out here, in this aborted place?

I strode up the middle of the empty road, between the swaying weeds towards another – active – roundabout where the occasional car whooshed  past.

But I didn’t go that far.

Instead, I turned abruptly and hopped over the metal barrier.

I plunged down the verdant slope of thistles and buttercups towards the spot where the zombie women had vanished.

For a while I circled around the embankment, through a shabby countryside in the lee of the sliproad scree slopes.

There was an apocalyptic feel to this place, patrolled by the undead.

There was no sign of the zombies, but there was a low, arched tunnel in the earthwork of the junction, with ribbed pipes protruding from the black chasm like the arms of giant robot octopus.

I entered the gloom, and stayed for a while in the cool, letting my eyes adjust.

It had only been 10 minutes, but already I’d begun to forget about Sainsbury’s, and my girlfriend shopping inside the virus-infested supermarket.

I was far away from all that now.

I was now a troglodyte beneath an unfinished junction, on the lookout for undead creatures in the scrubland.

My mobile phone started to ring but I didn’t want to answer it.

It all seemed a bit pointless, that life I left behind.

This wasn’t so bad.

The lush green fronds of the wasteland were pretty in the sunshine. The breeze in the tunnel was cool. Crows sang to me from distant trees. The piping was comfortable to sit on.

Perhaps I could stay here for a while, and ride out pandemic for as long as possible.

Whenever I was hungry, I might feast on the occasional curious visitor as they emerged, confused, from the supermarket car park.

Days, I’d join my middle-aged undead comrades as we foraged for rats and berries in the undergrowth.