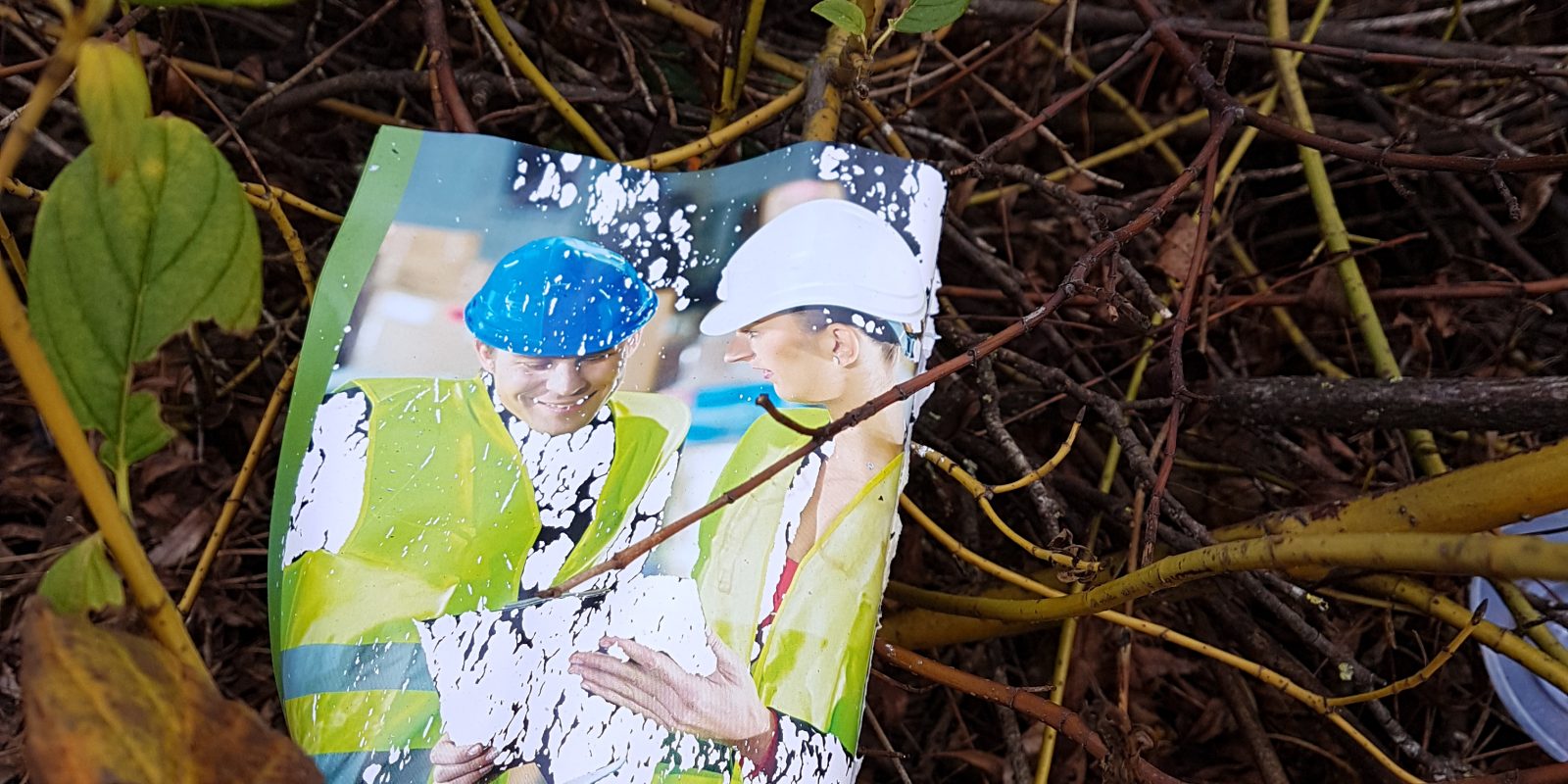 The Business Park in the Marsh: Post-Bre ...

My book, Unofficial Britain, explores the mythology and lore of industrial estates, electricity pylons, motorways, housing estates, roundabouts, ring roads, flyovers, hospitals & factories. To research the book, I made a series of trips around the country, one of which was to Grimsby in mid-December 2018.

In the aftermath of the Brexit vote, Article 50 had been invoked and the withdrawal agreement had been published the month before my journey. It was in this political atmosphere, on a grey Sunday morning, that I drove northwest from Grimsby to Europarc, a business park situated in a marshland between the A180 and the Humber estuary.

I pulled up outside ‘Beechwood Farm’ a harvester-style restaurant carvery pub on the edge of the business park, surrounded by boggy fields of pylons, striated with drainage ditches, crossed by ramshackle wooden bridges. In the near distance loomed the hulks of factories along the estuary edge, and the imposing Victorian tower rising from Grimsby’s dockland.

Inside the carvery, I met Marc Renshaw, a Lincolnshire-based artist who has grown a strong attachment to Europarc. In 2016 he created an exhibition based on the site, combining short fiction, film, drawings and marketing materials. He has also documented his wanderings through the business park and its environs on a blog.

We sat at a table and I ordered a tea. This turned out to be an empty mug and a finger pointed at a table containing teaspoons, jugs of milk and an urn of hot water. Marc ordered a cappuccino which took an age to arrive. When he asked for its whereabouts, the waitress said she hadn’t forgotten, though it was clear she had. There were a surprising number of people at the tables around us. A few families arrived, presumably using the pub as some kind of service station en-route to somewhere else. Or perhaps Europarc was now a destination in its own right, which is precisely how Marc had been experiencing it for years: a place to wander, think and – as he puts it – to occasionally “wallow in capitalism”.

Marc grew up in the Isle of Man, the British Crown dependency in the Irish Sea. Perhaps this is why he was drawn, he told me, to this island of business activity on the outskirts of Grimsby. As an adult, Marc lived in Cambridge for a while, near the Science Park. When he moved to Grimsby and saw Europarc for the first time, glimpsed in the corner of his eye while driving, he wondered what was going on in the marsh, where the trucks rumbled among stark metallic buildings. The place felt similar to the science park, which he had loved in Cambridge. But also familiar somehow, to his childhood idea of what Britain looked like.

“As a kid, big England appeared as a shadow on the horizon” he said. “On a clear day you could see the towers of Sellafield”.

From the Europarc island, Marc could look out at the industrial skyline, including the Grimsby Dock Tower, Lenzig Fibers factory and Novartis Pharmaceuticals, and feel strangely comforted. I wondered whether being called Marc with a ‘C’ made him feel even more predisposed towards Europarc, also spelled with a C? But I didn’t ask.

For a while after moving to Grimsby Marc worked out here in the marsh in the Kerry foods factory, a fish processing plant. It had now become a Morrisons distribution centre. He told me that it was the very Europeanness of the park that first captured his imagination. Evocative names like ‘Fabricom’ and ‘Achtis’ and global enterprise. Road names like Origin Way, Genesis Way, Pegasus Way and Innovation Way spoke of mythic rebirth and visions of progress. But now the general vibe of the place, said Marc – influenced by Brexit and the forces of isolationism behind that vote – was turning it into something more bland. Perhaps it would not even be called Europarc in the near future.

A weekend morning was a strange time to visit the place. The business park felt abandoned. In a layby jutting into a field near the carvery, we found the remnants of a plastic playground slide, and a smashed wooden farm fence, surrounded by energy drink containers. In a verge I spotted a page from a corporate magazine, showing two men in hard hats smiling at a piece of paper, had become distorted by sun and moisture, bleaching them with stark white blobs, as if they were being consumed by some ghostly ectoplasmic entity.

We walked down long straight streets, bordered by hedgerows, interrupted by access roads into vacant car parks for monolithic office buildings and warehouses in greys and beiges, punctuated by the occasional steel chimney. But this rigid formality was tattered by desire paths cutting through verges, endless litter from discarded kebabs and soft drinks, and occasionally signs of violent damage. For instance, the sign for Innovation Way looked like it had been hit sideways by a vehicle. Or perhaps this was simply an innovative sign design.

With a retro 1980s school dinner smell in the air, emanating from a readymeal food company, we visited the warehouse of Haiths, a birdseed company that was established in Grimsby town centre in 1937. A family business of local renown. However, for cost and space reasons it had moved out here to the island to become a big warehouse, like any other in the park, bland and anonymous.

However, the company has tried to retain its unique identity by placing multiple bird feeders and birdbaths at the edge of its car park.

All around the Haiths building, crows and starlings darted in and out of the hedgerows, spiralling over the grey roof, filling the small space above it with shrieking life. One of his Marc’s blog posts takes the form of a poem, which describes this spot:

I’m waiting on Genesis Way in my car.

The sun is blinding my eyes as I recall passive stares from the shirtless fishers by the lake.

The obligatory fountain has stopped.

The Haiths bird food hopper is on repeat.

A perpetual hum of productivity…

It was a strange sight, this flurry of wildlife, even more disconcerting amidst the perpetual roar of the A180 feeder road from the motorway, which we could only hear and not see. In the vacant sunday morning business park, that traffic noise was a constant ghostly presence. An intimation of its other life, as a thriving hub of commerce. I keep expecting a car to swing into view or suddenly rush past me, but when I turned to look, there was nothing on the road. The whole place was empty.

It might have been a twist of the circumstances, that abandoned grey weekend morning, but Europarc felt haunted by the spectre of economic disasters yet to come. A year later, the global pandemic would begin and a ‘no deal’ Brexit would be well and truly underway.

If you want to find out about the haunting qualities of trading and industrial estates, pylons, factories and modern roads, then order a copy of Unofficial Britain: Journeys Through Unexpected Places today (published September 17th 2020). It’s available on Amazon, Hive and Watersones: https://bit.ly/30yk6sg

For find out more about Marc Renshaw’s work, visit his website here.

Gareth E. Rees is author of Car Park Life (Influx Press 2019), The Stone Tide (Influx Press, 2018) and Marshland (Influx Press, 2013). His weird fiction and horror has appeared in Best of British Fantasy 2019, An Invite to Eternity, This Dreaming Isle, The Shadow Booth: Vol. 2, Unthology 10 and The Lonely Crowd. His essays about place have appeared in Mount London, An Unreliable Guide to London and The Ashgate Companion to Paranormal Cultures.