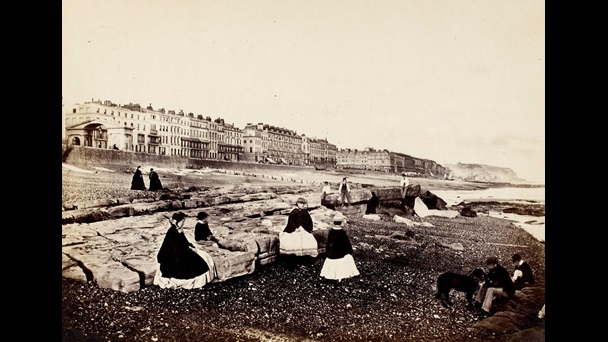 In the mid-nineteenth century, Hastings was one of the only towns in Britain where women greatly outnumbered men.

The health craze for sea bathing and temperate climate attracted elderly spinsters and wealthy widows who hired teams of female staff to look after them in their big terraced houses.

In this unusual environment, women were able to meet, talk and freely share new ideas.

From her home in Pelham Crescent, Barbara Leigh Smith, later known as Madame Bodichon, regularly travelled to London in the 1850s to meet a suffragette group at Langham Place and wrote for the Hastings & St Leonards News under the pen name Esculapius.

In one polemic she declared:

“Let your blue (stocking) daughter, your political wife, your artistic sister, and eccentric cousin, pursue their paths unmolested – you will never make ideals of them; you will only make your home the scene of suppressed energies and useless powers.”

Barbara Leigh Smith’s father was a radical dissenter and Unitarian who had children out of wedlock with a milliner named Anne Longden. He installed her in Sussex lodgings under the name of Mrs Leigh. When she fell ill Smith took the family to Hastings, renting 9 Pelham Crescent. As Anne’s health worsened she was moved to the Isle of Wight where she died in 1834.

With her mother gone, Leigh Smith was brought up in Hastings by her father, who taught her to be a wilfully independent spirit. She became a painter and a poet, with a useful friend in William Ransom, editor of the Hastings & St Leonards News, who supported her work.

In 1850 she went travelling in Europe with Bessie Raynor Parkes. Two women in their early twenties, striding across the mountains without husbands or chaperones, wearing heavy black ‘prostitute’ boots, blue-tinted spectacles and skirts that showed off their ankles.

It was an outrage!

But Leigh Smith wrote that a woman should “rejoice in one’s legs like a free-minded Albion’s daughter”. Every step she took with her wind-swept ankles was a radical act. Returning to England she hung out in Hastings’ bohemian circle with re-Raphaelite artists such as Dante Gabriel Rossetti and campaigned for women’s right to education, and to control their own property and earnings.

After she married Dr Eugene Bodichon she left Hastings but persuaded Elizabeth Blackwell, her best friend’s cousin, to retire to the town. Blackwell was first woman to graduate with a medical degree in The United States and now joined the women on the Sussex coast who were fighting not only for the vote but an end to prejudice and persecution. Despite being dominated by women, Hastings was a town where an 18 year-old girl got six weeks hard labour for stealing boots, yet a man got fined £1 for raping a four year old.

The movement caught fire in 1912 when Christabel Pankhurst sparked a campaign to burn down the houses of parliamentary opponents to women’s suffrage.

One such home was Levetleigh house in St Leonards, razed to the ground in April 1913. By that time the town was home to suffragist Isabel Giberne Sieveking, who publically sympathised with the action but was not involved.

Suspicious fingers pointed across the road to Battle Lodge, residence of Sheila Kaye-Smith, author of books about Sussex. She had recently fictionalised Hastings as a place called ‘Marlingate’ in her novel Tamarisk Town. “It lay there like a thing flung down,” she wrote of Hastings, “heaped and broken, rolling to the very edge of the waves”.

But in fact the fire was started by Kitty Marion, a leading militant in The Women’s Social and Political Union, which had established a foothold in the town. They held open air meetings and public rallies, parades and processions. Copies of The Suffragette and Votes for Women were sold on street corners.

One rally turned to violence in 1913 as suffrage supporters clashed with angry opponents on the seafront. The local paper reported that “Women had their hats torn off, their clothes torn from their shoulders. They were struck in the face, they were pelted and unnameable indignities were offered to them.’

In 1924 the Australian-born suffragist Muriel Matters ran as the Labour Party candidate for Hastings in the General Election. She was accustomed to a good fight. In 1908 she had chained herself to the grille of the ladies’ gallery at the House of Commons so she could make speeches about suffrage while police frantically hacked at the lock.

A year later she soared over Westminster Palace in an airship emblazed with the words ‘Votes for Women’. She lost the election in 1924 but found a permanent home in Hastings and, by the time the law changed in 1928, she could vote there too.

Gareth E. Rees is author of Marshland: Dreams & Nightmares on the Edge of London. His work appears in Mount London: Ascents In the Vertical City, Acquired for Development By: A Hackney Anthology, Walking Inside Out: Contemporary British Psychogeography and the album A Dream Life of Hackney Marshes. His story ‘There is Something Very Wrong with Leyton Mills Retail Park’ will appear in the forthcoming collection An Unreliable Guide to London.