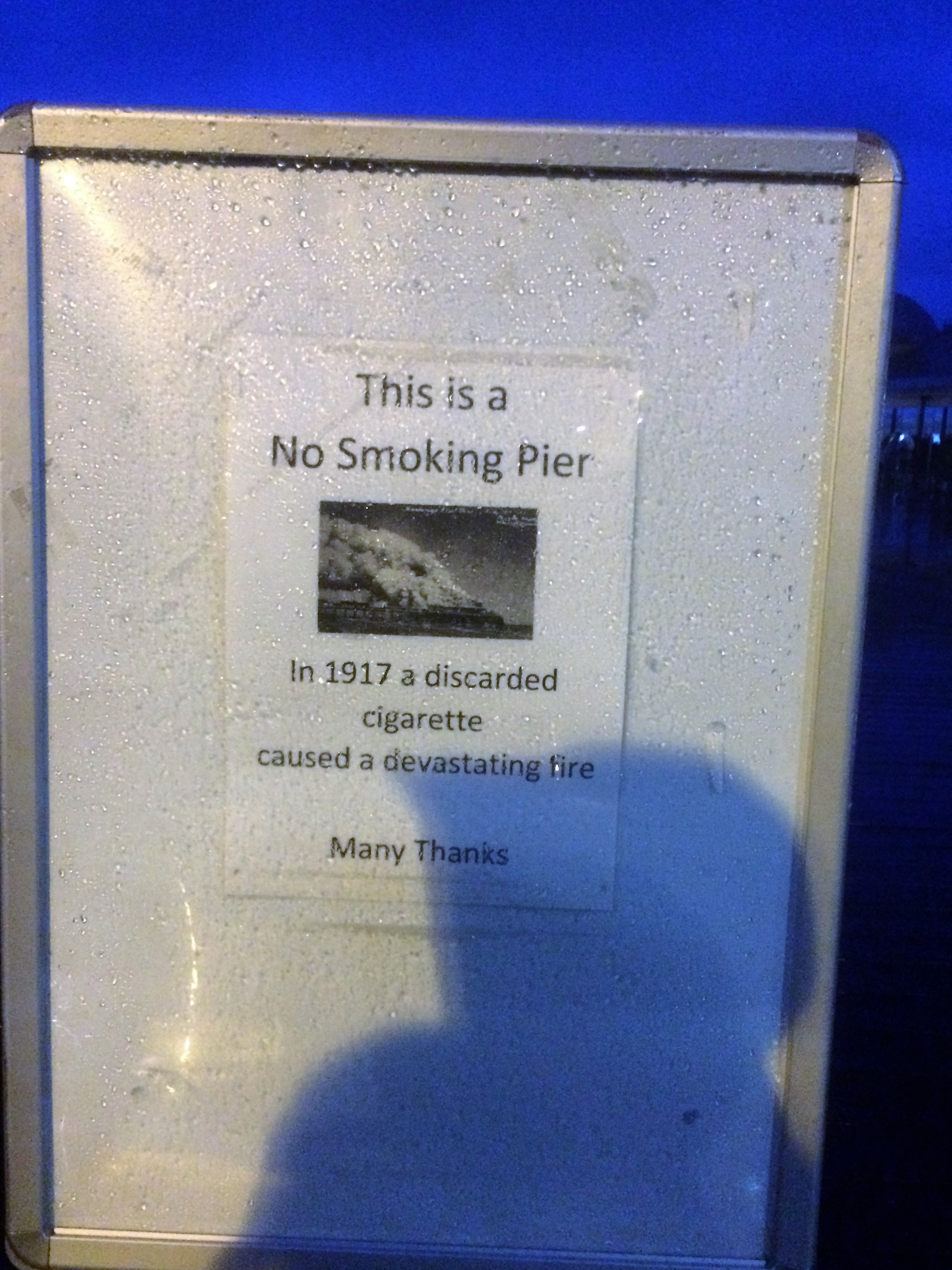 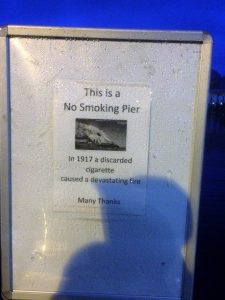 Piers are by definition irrational structures – temporary institutions, neither sea, nor land, living on borrowed time until the inevitable conflagration.

But then, which of us hasn’t felt that way at one time or another?

“You’re not allowed to smoke on the pier”.

This is the accepting, civic-minded refrain of the Dizzee Rascal and KRS-One fans taking temporary leave of absence from the newly re-opened Hastings seafront landmark to enjoy their cancer sticks in a specially barricaded paddock in the gutter of the A259. And you don’t have to look far in the hinterland  of this enticing hip-hop (because Dizzee’s music is fundamentally hip-hop, even though no-one is really meant to say that for fear of raising underachieving spectres from British rap pre-history) double-header to see compelling evidence for caution when it comes to naked flames .

Looking back at the 144 year history of this 910 foot structure – originally designed by the excellently named Eugenius Birch – fire actually looms no larger in the pantheon of near extinction events than storm damage, lightning strikes, share issues and compulsory purchase orders. But no-one who has watched footage of the arson-prompted inferno which destroyed 95% of the pier in 2010 is going to be lighting up out there in a hurry.

Two arrests were made in the aftermath of that horribly destructive blaze, but as so often in the smoke and mirrors history of pier destruction, no-one was charged.

In May of this year, the last plank of 50 miles of decking on the pier’s £14m lottery refurbishment was fixed by ‘Hastings-born musician’ Suggs from Madness. He seemed a fitting choice of dignitary for several reasons. First because from a cost-benefit analysis/probable life expectancy point of view the rebuilding of the pier did actually seem like madness. But also because of the end-of-the-pier character of that band’s seemingly eternal twilight years, and the historic (well, in the sixties and the rave era, but they’re both history now, aren’t they? Dominic Sandbrook’s career relies on that) association of the pier with pop music.

This colourful vase by Bexhill frontier ceramicist Peter Search commemorates some of the big names who performed there in analogue times. 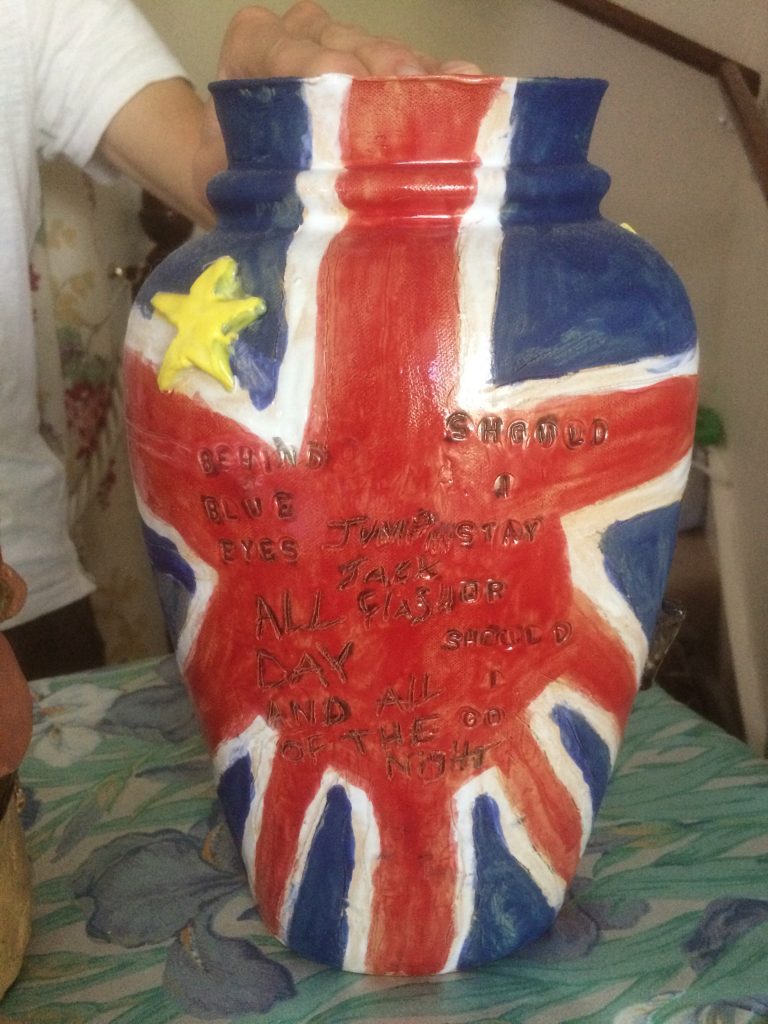 One of the new breed of antiques shops run by men with well-tended beards which are a symptom of the oft-noted ‘up-and-coming’-ness of Hastings’ George Street (in the same way that tiny black dots on the carpet bespeak an infestation of fleas) also does a profitable – £20 including basic frame – trade in ‘original’ posters like this one. 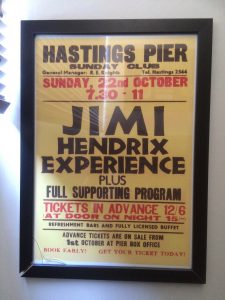 That’s the funny thing about the age of mechanical reproduction. In the sense that all posters have at some stage been printed from an original, all posters are original. 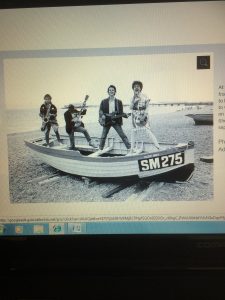 My favourite image from Hastings pier’s colourful musical history is a snapshot of Marianne Joan Elliott-Said (later Poly Styrene) at the site of the Sex Pistols gig she went to there on her 19th birthday (3rd July, 1976) which inspired her to form X-Ray Spex.

I thought this photo appeared in Jon Savage’s England’s Dreaming but couldn’t find it there so a later, computer-harvested  image of the band on the pebbles (Spex on the beach!) with the old pier in the background will have to do.

Any lingering doubts (if there were any, which there aren’t) about KRS-One and Dizzee Rascal’s qualifications as inheritor of this proud tradition would have been dispelled by the time one of the people I go to the gig with’s three year old daughter had tugged at his trouser leg as he left the house and proclaimed “Woop! Woop!” The town’s proud tradition of lawlessness and civil disorder ensure that this song is already an anthem in Hastings.

KRS-One taking exception to the security bulwark at the front of the stage – “What is this shit?” – leaping straight into the crowd, and marching round having selfies taken while bombastically declaiming about how much better rap was in the old days doesn’t do the mood of the crowd any harm either. 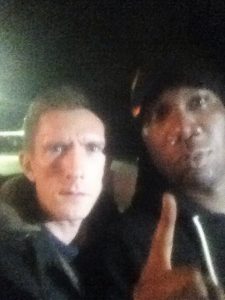 Here is one of these iPhone shots of the great man, in this case with Adam Brecher, co-proprietor of Hastings’ leading second hand vinyl emporium Atlas Sound Records, which has the sleeve of KRS-One’s finest moment By All Means Necessary (released as Boogie Down Productions) up behind the counter.

This is just one of many pleasing elements of psychogeographical equilibrium which can be discerned in tonight’s event. Another is how well some of the pier’s more mystifying architectural accoutrements adapt to the infrastructural needs of the outdoor live music event. The dressing rooms sit comfortably within the somewhat clunky cladded structure which gives the centre of the pier a vague look of Robben Island. And inside the backstage area, veterans of the rave era recall the alarming way the old dressing rooms opened out directly into the sea.

These days the stage faces outwards, rather than inland, presumably to limit options for freeloaders hoping to enjoy the show for nothing on the beach (people in Hastings are quite spoilt for live music options and accordingly prefer not to pay for them, as I know to my cost having once promoted a gig here).

But that doesn’t stop a smattering of dancing dog-walkers on either side of the pier from adding their slow motion sand skank to the inevitable jigging policemen on the boardwalk. 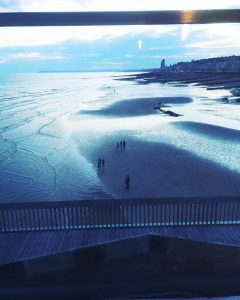 Kept on his mettle by KRS-One’s avuncular posturing, Dizzee Rascal performs a superbly sinewy set which prioritises the dense and dynamic wordplay of his classic first three albums over later more mainstream pop adventures. By the time he has bolted a few “Woop Woop”s on the front of his Limehouse police knocking at my door anthem “Sirens” and declared himself a bassline junkie in the song with arguably the most entertaining British pop video of the 21st century, Dizzee’s cries of “Where’s my Kent massive?” are being met with an exultant response .

[nb. He has not succumbed to the widespread misconception that Hastings is in Kent rather than East Sussex, he actually lives in Kent.] 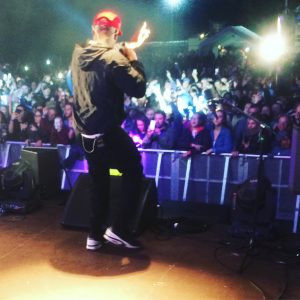 All of this locally-sourced exuberance – echoed back by a crowd which just seems delighted something this big is happening here – makes the disapproving look of The Guardian’s review of the event a couple of days later all the more surprising.

The headline picks up journalist Caroline Sullivan’s use of the word “thuggish” (subsequently adjusted to “thunderous” online in response to the social media version of raised eyebrows and tongue clicking) to describe a perfectly anodyne lyrical expression of physical desire. Thank goodness Robert Plant wasn’t judged by such exacting standards, but then I suppose life was much less problematic for him, what with being a white guy and everything.

What remains of the review’s stand-first after remedial intervention by the forces of political correctness still describes Dizzee’s “sexual swagger” as “ill-advised”….“Ill-advised” according to who, exactly – Mary Whitehouse? Pat Boone? Erstwhile imperial wizard of the Ku Klux Klan, David Duke…?

There is no space here to fully encompass the implicit racism on show in these word-choices because this is only the internet after all, but no doubt Dizzee will have shrugged off these verbal slings and arrows with his characteristic speed and equanimity . He’s out there in the open space, just like the pier is, and the motto of one might just as well apply to the other – “Some people think I’m bonkers, but I just think I’m free”.

Ben Thompson (aka @btfoshizzle) is a music journalist and ghostwriter who lives in Hastings. His most recent publication is Terry Gilliam’s Gilliamesque (Canongate).