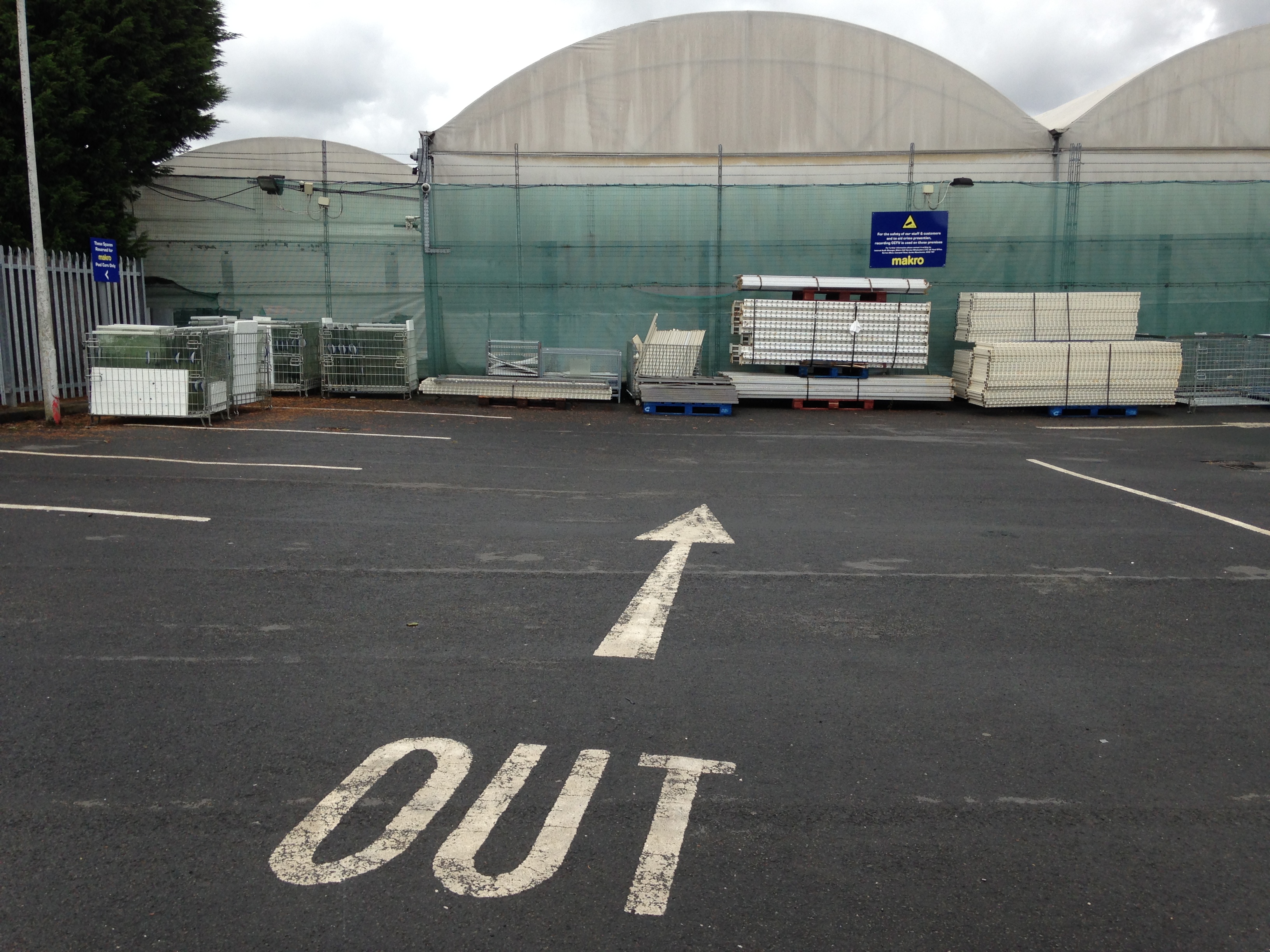 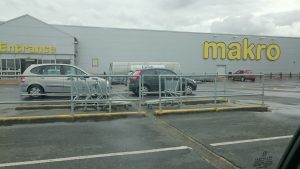 I only remember Makro because of its car park, the space outside the place.

The interior of Manchester’s warehouse cash ‘n’ carry store was forbidden to children under twelve, so my parents would leave my brother and I inside the car while they went shopping for jumbo bags of Wheataflakes, broken biscuits and ready salted crisps. These were all available at trade prices in the Manchester branch of Makro, a giant grey building hunkered by the ring road in the Eccles area.

The car park was always packed, as I remember. Rows of cars gleaming in the watery sunshine. After parking, Mum and Dad would stride through sliding doors into the mysterious world of Makro.

What was inside that place? 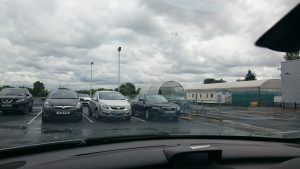 I envisioned towering racks of boxes, men in brown coats with clipboards and forklift trucks moving at speed with stacked pallets, a place where no child could survive more than five minutes without being crushed to death, which was why were banished to the car park, where the air stank of petrol and oil swirled kaleidoscopic in puddles beneath clapped out motors.

Of course, it was the ‘80s and people didn’t know enough about the many ways to be injured, paralysed and violated to care about leaving young kids in the car while they went shopping at wholesale stores.

My brother and I pretended our car was a spaceship, turning the steering wheel and punching buttons on the cassette player. I’d open the door and stand on the passenger seat, my head high over the top of the car, to behold galaxy of red, white, black and green metallic roofs and sparkling windows, as far as the eye could see.

We were lost in space, exposed to the elements, two fleshy young humanoids in an alien world of tarmac and metal.

Thirty years later, I stand in the same car park…

I’ve travelled from my Hastings with my wife and daughters, en-route to Scotland, but making a detour to this car park of my youth, a place to which I have not been since we moved from the Manchester area in the late ‘80s.

I never thought about Makro much until my obsession with car parks began and I started travelling to them as destinations – to walk around them as a pedestrian spectator as you would do in a botanical garden or nature reserve. 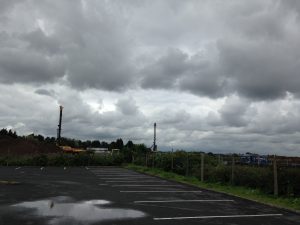 This new obsession isn’t popular with my wife or kids. They’re staring at me bleakly from inside our Peugeot as I stand a few metres away, sniffing the air for a memory. For me, this is a piece of my history – an origin car park – and I am convinced I’ve come to the wrong place.

Clearly this isn’t the Makro from my childhood.

For one thing it’s smaller than I remember, a puny square of white lines compared to the vastness of the place my brother and I had to contend with. It’s almost empty too – there can only be thirty cars or so. All around the back perimeter are fields with trees and, to one side, a huge swathe of scrubland piled with mounds of black earth with diggers rumbling over them. It’s as if this Makro is the first in a series of encroachments onto a fresh piece of edgeland. I cannot recall the car park backing onto a wilderness.

Still, we’re here now, and my youngest daughter needs a wee, so we go and talk to someone at the door. I’m asked for my membership card but I have no card. So yet again, aged forty-one, I am forbidden to enter Makro. I explain to the woman at the desk – name tag: Maria – that my daughter is desperate for the toilet and she kindly directs my wife and kids through a nearby door.

While I wait, I ask Maria where the original Makro was located, the one from the 1980s.

“This is the same Makro that’s always been here,” she says, laughing. “I should know because I’ve worked here since 1979.”

I am taken aback. While my brother and I were on our childhood car park adventure, Maria had been here, inside the building!

The continuity is wonderful. I feel like hugging her.

When Emily and the kids emerge I excitedly tell them that this is it – the same Makro – and they show no emotion. I explain to Maria why I have come to Makro for a visit, not to see the store but the car park. She shows no emotion either, except perhaps a modicum of pity. But in my two years of exploring car parks I have become used to this facial expression. 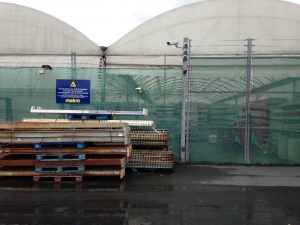 My family goes back to the car while I get out my camera and explore. The one aspect that matches my recollection is the lack of foliage. No trees or shrubby dividers. No pedestrian paths. No chid-and-parent parking. The tarmac is marked with white lines for cars, with raised yellow-lined bays for the trolleys and curved gullies for the rain run-off to sluice into the drains. This place is all about trade. A sign declares ‘select and collect’.

Get in, get out, that’s what it’s all about. 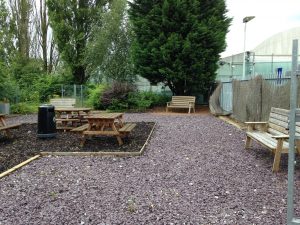 It’s more interesting as I walk down the side of the building past the staff parking. Beyond the bollards is a garden of picnic benches and chippings.

This is a surprise…

The nether regions of a car park are usually where the social order breaks down, becoming scruffier, less regulated, more lawless. Yet this space is like a garden in an old people’s home, ringed by long vertical poles with Middle Eastern style gold bells at the top.

As I round the corner, I realise I am now in the Makro garden centre section. The landscape I’ve walked through was nothing more than a display – a fake! – its purpose for selling, not for dwelling. 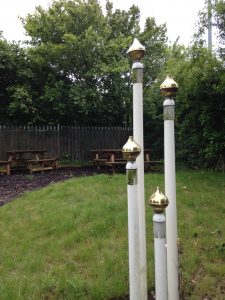 I return to the main car park, taking a barriered access road with mysterious green plastic hatches. From beyond the hedge I hear a cacophony of insect sound and bird trills.

Eventually, the hedge falls away and a scrubby wilderness opens out, all the way to low hills on the horizon. In a field a man sits in a tractor, the engine turned off, crows circling. I’m separated from this scene by a wire mesh perimeter fence that feels under attack by nature, the buckled concrete posts enshrouded by nettles, briars and swaying purple buddleia, as if the vegetation is about to overwhelm it and surge across the brutal Makro tarmac which has repressed it since 1979. 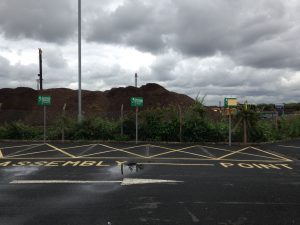 At the far bottom corner of the car park I press my face against the mesh to gaze upon the freshly chewed-up land where diggers growl among the red pile drivers sticking from muddy barrows where men in hard hats yell across flooded mini-lagoons, beckoning concrete mixers and trucks piled with stones.

What are they building out there?

I turn back to see my kids in our car, staring at me as I photograph the decayed yellow paint of the de-commissioned assembly point sign, aware of myself suddenly, and how ridiculous I am.

I remember my brother and I in our hatchback spaceship and Mum and Dad in Makro, hunting for bulk bargain deals. Now my girls are watching me shuffling around with a camera, exploring paint markings and abandoned trolleys. I feel a cycle turn. 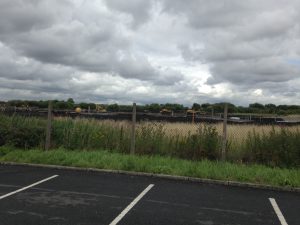 I marvel at how this place could be so different to how I remember it, and yet also be virtually unchanged since last I was here.

I get the unsettling feeling that this car park and its environs have been in a holding pattern, chronologically retarded, like a figment of my imagination, and that when I drive away in five minutes’ time, everything will stop again until I next return.