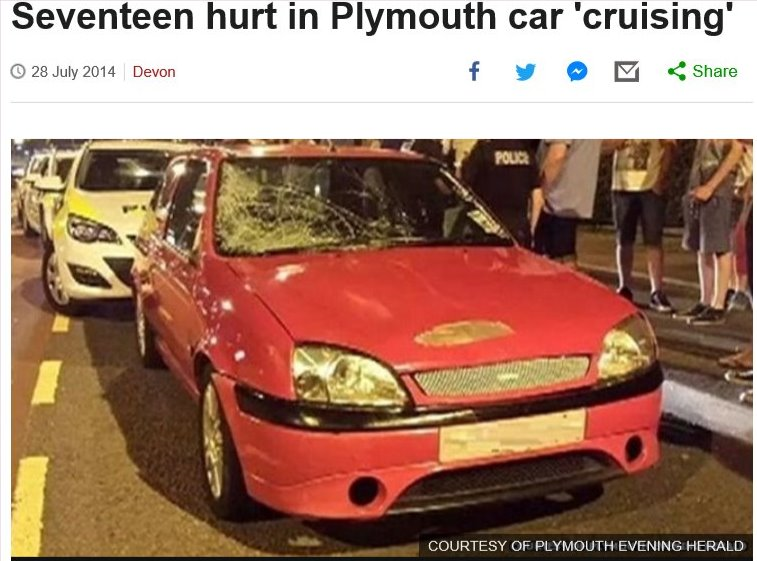 LOCATION: A supermarket car park near you, probably.

A twenty-year old named Christopher Budd enters a skills competition with his friend Ryan Swaddling, whom he has just seen do a burn-out right in front of him, his car barely visible amidst the impressive clouds of smoke. Fresh rubber marks on the tarmac like black semen. The air electric.

Charged with adrenaline, Budd slams the accelerator on his red Ford Fiesta and hurtles towards Swaddling’s Honda Civic. A crowd of kids on the kerb gasps in delight, raising their smart phones to film the stunt. Budd waggles his foot at the brake as he turns the wheel to skid free of collision but he makes no contact with the brake pedal and his car does not stop, it does not skid, there is no applause, no cheer. Things are not okay.

The car hits the kerb and ploughs into the crowd, knocking down sixteen spectators and flipping a teenage girl into the windscreen, shredding her face on the glass.

Despite this, footage still ends up on YouTube. No point in wasting the moment. Violence is viral.

That same year, a 47-year old named Tracey Ann Hernandez goes for drinks in the centre of Llanelli to celebrate the news that her house purchase had gone through. Hours later the police catch her in the Asda car park, out of her tree, merrily performing doughnuts in her Fiat, smoke billowing from the tyres, rubber scorching the air.

She later tells the court that she lives a quiet, sober life and rarely goes out. It was a blip. A moment of madness. She does not know what made her suddenly jump behind the wheel of her car and career round an Asda car park at night.

In a somnambulant daze she has joined the legions of lowriders, joyriders, cruisers and doughnuteers who turn car parks into racetracks across the country.

For almost twenty-five years the car parks of Sainsbury’s and Asda, bifurcated by the A41 on the Dome Roundabout in North Watford, have played host to wild stunts and races after the stores close. Neighbours complain about the scream of tyres through the wee small hours. The revs, whoops and cheers. Smash of broken bottles. Grime from the woofers. Have you got any Rizlas, mate?

Bournemouth’s Ferndown Tesco car park is buzzing with car horns, adrenaline and hardcore techno until 3.45am. Robin Park Asda in Wigan becomes the local speedway track after sundown. “Anything could happen walking across there at night,” complains local Mark Feagan, “there is no security out there.”

In Blackwood, Wales, eighty-five cruisers are caught racing around ASDA, McDonalds and KFC in the space of an hour. They get a twelve-month car park ban.

In a Dudley Tesco Metro at 10.30pm on Boxing Day, cars gather in the multi story: a VW Golf, a red Peugeot with a rear spoiler covered in tinsel, and a silver Vauxhall Corsa which snakes around the ramparts with a 20-year old woman on the bonnet until, with a frightened cry, she slides off, fatally hitting her head.

In a Tesco supermarket car park in South Queensferry, West Lothian, in 2009, kids use the cash machine to withdraw bank statements that show the location and time. They leap into their cars and speed for three miles to the village of Newton where they turn and race back to Tesco to withdraw a second statement. Here is absolute proof of their race time, down to the second. No arguments. I win. Pay up you prick. Ha ha!

These cash machine wacky races spring up across the UK. Supermarket car parks are ideal starting points with their petrol stations, all night munchies and multiple cash machines.

But car parks themselves are the ultimate tracks. From the safety of a Solihill supermarket petrol station, staff watch in horror as a thousand people congregate to watch boy racers express their knightly instincts on a self-made drag strip, jousting with their cars to screams of delight from their low-slung trousered peers and wide eyed girls with iPhones.

In a Plymouth Morrisons one evening, Karolina Jaworeli and the young daughter of her friend are passing through when, suddenly, they’re caught in the glare of headlamps like a couple of deer. Engines roar as two boy racers speed directly towards them. Karolin and the young girl duck into a trolley bay where they cower as racers circle around them, whooping like cowboys, windows open, middle fingers aloft. A resident tells the local newspaper that supermarket workers encourage this by locking the speeders into the car parks after closing time to give them free reign.

In a Peckham Sainsbury’s a sexually repressed man parks in a corner for a quick Tommy Tank when he’s buzzed by three Fiestas driven by “pecker-necked baseball cap-wearing scrotes come booning into the car park” to interrupt his hand job for a hand brake session.

Back in Bournemouth again. This time in a pub car park where a 30-year-old man shows off his driving skillz to the 26-year-old hairdresser he’s taken out on a date. His red BMW ploughs into a tree, crunching the bonnet and shattering her arm. The man’s side of the car is unaffected so he gets out and flees the scene, leaving the hairdresser pinned inside, weeping and bleeding.

“It’s definitely the worst date I’ve ever been on,” she tells The Daily Star.

There’s a sense that this is a legitimate use for car parks after opening hours and that drivers have rights to do this unimpeded. On a car-lover’s forum a commentator opines:

“It’s a great way to learn car control and ideally the facilities should be made available to improve what is basically a survival skill. I remember spending a couple of hours in the car park in Cobham in my Lancia, sliding around like a nutter. No Bibs showed up to tell me off.”

But it’s not always plain skidding. On a ‘driver defence’ website, a man complains:

“I was doing donuts in a new vehicle which I was insured for in a very large empty retail car park. Undercover police came and gave me 3 points and a 60 pound fine. They were very rude called me a dick and a few other things, stereotyped me also they only saw me do one donut (skid).”

The logic here seems to be this: one doughnut, fine. One doughnut could be an accidental skid, albeit stylishly done. Two doughnuts? Well perhaps the surface is icy. Three doughnuts? Well now you’re taking the piss and it’s ok for the police to intervene, as long as they’re polite and don’t make assumptions about you. Because the big issue here is the stereotyping of men who do doughnuts as ‘dicks’ or ‘boy racers’.

Clearly doughnuteer prejudice is something the authorities must address, even if it means bumping down the priority of minor prejudices like racism and sexism.

Appropriately, in April 2017, a gangster-affiliated millionaire businessman named Frankie “Donuts” Donaldson gets his comeuppance in a Glasgow car park when a gang of men beat him to a bloody pulp as he leaves his car. It means he cannot appear later in court that day to be sentenced for what The Daily Record calls “a horror campaign of violent domestic abuse.”

It’s the circle of life.