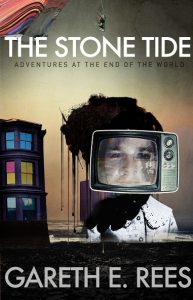 I’m a chronic pessimist. If I were ever to look on the bright side it would blind me.

However, if you’d told me on the 31st of December 2015 that within the next 12 months my marriage would end, Britain would vote to leave the EU and Donald Trump would be POTUS, I’d have accused you of being a doom-monger.

Of all the kinds of monger (fish, iron, cheese etc) who might make predictions to someone as melancholy as me on New Year’s Eve, you’d be the worst. Damn you.

Theoretically, I shouldn’t have been listening to you at all, with your outrageous Brexit, Trump, Divorce proclamations.

WHO DO YOU THINK YOU ARE?

But you were dead right. Because 2016 happened and the ground crumbled beneath me.

Beneath all of us, really.

This world we think we know…

The walls that protect us…

The identities we assume…

They are not safe.

I should have known, of course, because I was putting together my second book after Marshland, set this time in Hastings, on the East Sussex coast.

And the clues were all there….

…The day I moved to Hastings my wife’s granddad died and I was attacked by a possessed seagull.

…the seascape triggered a series of powerful memories from the last time I lived by the sea, in St Andrews in 1996, a time that ended with the death of my best friend. I was the last person he ever saw, ever talked to. Suddenly he was back in my life, after almost 20 years.

…My wife and I found occult objects sealed into the walls of the crumbling Victorian house we’d bought. A child’s shoe, a caiman, a mummified heart (probably)…

…I turned 40 and became afflicted by a mystery illness that required me to go through a series of horrific medical humiliations, including one in which my back passage was studied by a phalanx of doctors, nurses and startled medical students.

…In the summer, that hot global warming summer, we were invaded by bluebottles. They seethed over our windows, blocking out the light…

…Then in the autumn the rains began to fall in biblical proportions until the cliffs fell into the sea. This is what it looked like [ACTUAL FOOTAGE].

“It’s gonna go, it’s gonna go” says the man filming, which is pretty much what I said on the morning of Friday 24th of June after the Brexit result.

In the 13th Century a warming climate created storm surges over a period of 40 years,  culminating in the cataclysmic storm of 1287, destroying the town of Winchelsea, tearing down half of Hastings castle, reshaping and renegotiating the coastline, silting up Hastings’ vital harbour and ending its period of national strategic importance.

For the residents of poor Old Winchelsea it was the end-time for the town they loved and a catastrophic transformation of the landscape upon which they worked.

On the other hand, new opportunities arose. The course of the river Rother was altered turning landlocked Rye into a thriving port. When the new estuary eventually silted up, it created fertile farmland for grazing sheep and the salt marsh wildlife haven of Rye Harbour nature reserve.

The end is also a beginning…

This word Apocalypse is used to describe the ‘end of the world’, ‘end times’ or judgement day, but its original Greek meaning was an ‘uncovering’ or ‘revelation’. It can bring change and new understanding.

This idea of transformation through cataclysm is something I kept finding in my research.

Aleister Crowley, who lived his final two years in Hastings was the self-proclaimed gatekeeper of the Age of Horus, a new aeon in which humankind would assume godlike powers. This would come about only through chaos, disruption and some seriously transgressive jiggy-jiggy in the bedroom.

Similarly, JJ Williamson also lived in Hastings, where he set up the British Society of Metaphysicians Society. During the war, he lectured his fellow pilots about a new type of metaphysics that would harmonise us with the laws of the universe and fuse us with something he called ‘The Absolute’. But Williamson warned that this transformation might only become possible after an ecological or nuclear global cataclysm.

Finally, the radical Jesuit priest Teilhard de Chardin trained in a seminary in Hastings and hung out with the future Piltdown Man hoaxer Charlies Dawson. He also predicted a transformation of human consciousness in which we could reach an Omega Point, an end-time in which we would all think as one and unite with God.

Even John Logie Baird, who carried out his first successful television experiment in Hastings, was using a tool first envisaged by spiritualists as a tool for communicating with beings from another realm. It didn’t achieve that, but it completely transformed the world in the 20th century, endowing us with the power of ‘remote viewing’, one of the occult’s holy grails. If anyone ushered in a new Aeon, it was the entrepreneur Baird, not the magician Crowley.

What was it about this place, this stretch of coastline, that encouraged these ideas – these mavericks, visionaries, cranks and dreamers?

Is it because Hastings is at the end of the line?

I didn’t know, but the more I looked into it, the more I wrote about climate change, crumbling cliffs, Crowley, Baird and Teilhard de Chardin, the more my life fell apart. I spent the next three years going through an apocalypse of my own. One that would result in my losing almost everything I’d known to be permanent and true.

The result is a book called The Stone Tide: Adventures at the End of the World. A blend of memoir, horror, weird fiction and psychedelia. By the time I finished writing it, my marriage was over, Britain had voted to leave the EU, Donald Trump was leader of the ‘free world’ and fascism was on the rise. I had no intention of creating such a thing when I started out, but this book turned out to be my hymn to the end times.

To get advance news of when The Stone Tide is released please join the Unofficial Britain email service or follow me on Twitter  here or Influx Press here.