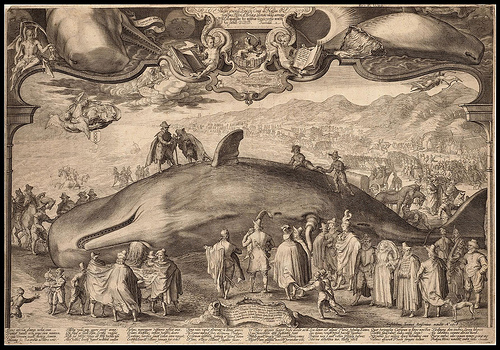 There was all the stuff you’d expect; heart lungs liver kidneys etc. Baleen thick and numerous like bristles on an old paint-brush. But nothing in the gut, half-digested and smelling of pricey French perfume. Empty intestines they said unravelled for half a mile. It was running on nothing. No signs of malnutrition or malnourishment, no pocks or blemishes suggesting deficiencies, no barnacles like aggressive teen acne, no scuttling whale lice, pale and piercing. As if the model had arrived straight off the factory line without once being used. An idea of a whale.

When it happened I was drinking a lot, watching popular dramas through my digibox and not feeling as bad as I should have done about being laid off.

The guy who found the whale, was one of those motivated joggers in tight lycra running along the shore. He liked to get up early, he said in the local paper, and be alone with the herring gulls and piles of rotting bladderwrack. The crunch of shingle beneath my feet. It’s so peaceful at dawn.

I’d seen the dawn on the coast myself, but from the improper perspective and coming at it from the wrong direction. Never gotten up to see the pink glow, only ever stayed awake long enough for it to creep up on me. People don’t respond to those stories in the same way, and I wonder how I’d have been portrayed if I had found the carcass.

Leviathan, beached whale, signifier of something I’ve yet to put my finger on. It’s not that beachings are uncommon on this coast. A pod of pilot whales, in sympathetic solidarity, left themselves out to dry up on Dunlin Point. That was in ‘96. Bottlenose dolphins too, so numerous it hurt to think about it, committed mass suicide in St Michael’s Bay, like they’d all decided it was just too much effort to keep going. That was ’02. I knew the story from Victorian times about a sperm whale washed ashore near the town six miles down the coast; opening it up, an intrepid scientist stepped into the thing’s heart only to slip and end up drowning in whale blood. 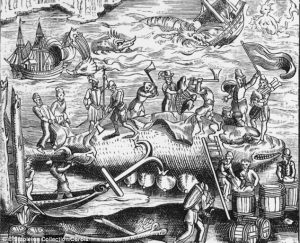 Our whale was ninety feet long, a pristine and unblemished sky blue. It was alone. The morning it happened, I noticed a commotion outside. More people than usual, kids with sticks they used to prod and poke. The weather was clear but cold, heading toward winter. I pulled on my thick green coat, mud-crusted boots I’d bought on offer from Sports Direct, made sure my iPhone was charged. Always worth grabbing a few pics. The coast along the Hollow Shore, bleak though it is, is always photogenic.

I crossed the road, listening to the cries of the herring gulls up among the chimneys, ducked down the little alley that wound past a beached wooden boat and onto the beach. Shingle crunched underfoot – it was nice, the jogger was right – and already a crowd of the townspeople and journalists surrounded the whale, cameras flashing like they were a group of tourists at the Louvre.

And what a sight. Even as the birds pecked at its flesh, it was majestic. It made life in this provincial, salt smelling town, seem all the worse. Here was a reminder of what life could be, how fucking grand the world was capable of being, how I had just been let go from Pfizers as they wound up the business and was drinking my way through a dwindling stash of savings watching HBO dramas.

There was a recession on. The council made all the right noises but nothing happened. The story got into the national papers, a wind-blown journalist for BBC South East pontificating to camera as a herring gull tore off a strip of blubber in shot behind him. But there was no money, they said. Nothing spare to haul the carcass away. A travesty, shouted the scientists and naturalists. This thing was, after all, an anomaly. But it costs tens of thousands to haul a whale away, even one so empty and pure. 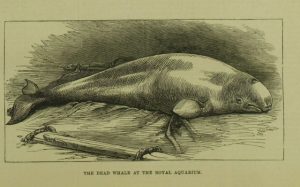 As the days and weeks went by, with the stench increasing (a mix between that rotting bladderwrack, abattoir, open sewer and fungal infection), I’d think about its baleen and the strokes of a giant’s brush on a canvas as wide as the sky. I wondered where it had come from, and why. I found stories about whales that were the last of their species, singing a song that would never find an audience. Or reports from men with expensive equipment far out on the open sea, about whale song recorded matching no known records. I wondered if our whale was one of a kind, some chance mishap of whale miscegenation, doomed to beach on the south coast of England and never be understood. I could sympathise with that.

A kind of rogue science set in, looting the booty. I wasn’t above it myself. There was money to be had. I hacked off the flukes that first night. No CCTV on the beach, only kids smoking weed sat around crackling driftwood fires, listening to the pop of heated pebbles. I sold the flukes to a collector on the dark web who paid enough money to buy me a few more months. I felt bad, but like I said, there was a recession on. I took a chunk of flesh for myself, while it was still fresh, and fried it up in my small kitchen. It was tasty, if chewy. For some reason I thought it would taste of fish.

Each morning I’d head out and check on our whale’s progress. Death has its own energy. A micro-ecology feeding boiling masses of maggots and flies, the gulls, waders, crows and more that fed on the insects, flesh and thick skin. The peregrine I saw take an unwary gull. The slithering things and barking foxes at night.

The whale got its own Twitter account, fuelling a thousand shared photographs of the wonder of decomposition. Some thought it a sign of salvation, others doom, and so the whale fed us too, allowing us to project what we wanted onto its degraded form.

One morning, the whale now just shreds of flesh hung over a bone frame, I headed to the beach and saw a man who had scolded me for throwing stones at cans the previous summer. He was sitting on a wooden bench, staring out over at the carcass and the flat sea behind. I don’t think he recognised me.

It’s a disgrace, I said, close so he would hear.

Children have to play around here, I said.

I carried on towards the whale. Flies were buzzing, a dirty encircling halo. Gulls took flight at my approach. The smell of rot everywhere. 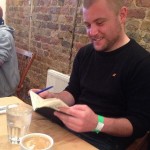 Gary Budden is the co-founder of independent publisher, Influx Press and works as an editorial assistant for Unsung Stories. His fiction and essays have appeared in Black Static, Structo, Bare Fiction, Gorse, The Lonely Crowd, Under the Radar, The Learned Pig and many more. His debut collection of stories, Hollow Shores, will be published by Dead Ink in October 2017. Click here to read his blog: New Lexicons.