And Also the Trees: Born Into The Waves (An appreciation) 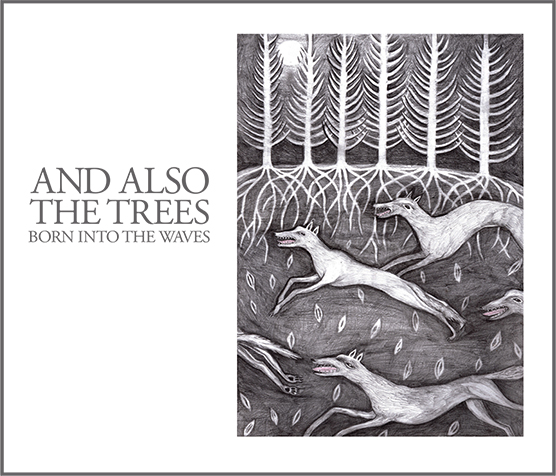 And Also the Trees: Born Into The Waves ...

Born Into the Waves is a series of offerings, not of events; of settings, not actions. It presents a landscape in which the sea is as deadly in its calm as its torrent, the world swirling around in ecstatic terror while we are enveloped in a kind of eerie stasis, watched but motionless. These are the scenes we are offered – a hunter defies his better nature, ‘looking out across the wastelands’; a couple lies entwined, sculpted, sleeping, acquiescent; a man awakens to the harsh cry of urban reality as well as a glimpse of redemption.

For more than 30 years the Worcestershire-born band And Also The Trees has ploughed a singular furrow in the well-worn and oft-maligned field of ‘Gothic’ rock. The band’s 1983 debut single ‘Shantell’ rang with flanged 4AD guitars and ooh-spooky synths, but there was something more than that, too: an atmosphere more Wuthering Heights than Release the Bats. Led by brothers Simon (singer) and Justin (guitarist) Jones, from the idyllic village of Inkberrow in the fields east of Worcester, from the very beginning And Also The Trees was Gothic the way only a rural English band could be: a pastoral Gothicism of sentient landscapes and dark implications – rather than bloodied-teeth-and-dyed-black-hair, AATT was summer-dress-snagged-on-a-thorn-bush-its-wearer-ominously-absent.

By the time of ‘Gone … Like the Swallows’ from 1986’s Virus Meadow, the essentials of the AATT aesthetic were fully formed: ethereal, enveloping mandolin-style tremolo guitar over a punchy, punctuating rhythm section, topped with Simon Jones’ sing-spoken, image-laden poetics. It’s a sound and a style the band has worked to great artistic success (and essentially zero commercial viability) ever since, adding loads of Continental flashes and flares along the way: rhythms from Vienna and Spain, from the streets of Eastern Europe and the cafes of Paris, with heavy doses of Nick Cave, Scott Walker and Nico. 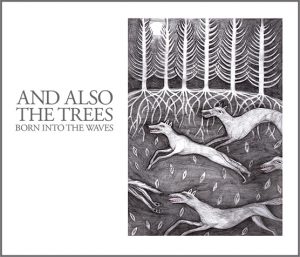 Yet what it all adds up to is something wholly British in its fierce passivity – the lingering, invisible watchfulness of an English field. And nowhere is this more prevalent than on the band’s latest release, Born Into the Waves.

Take ‘Hawksmoor and the Savage’ with its stalking rhythm, plucking along, as a portrait of a hunter appears bearing a (severed?) head. This character that should prowl and threaten instead moves philosophically; intellectually rather than physically across its landscape – like the title character in John Gardner’s Grendel, a savage and an existentialist at once. Or ‘Boden’, in which the band resembles, as it does often and well, the seascape swells and recessions of a Romantic string section: Simon Jones’s words describe a scene, an eponymous character moving through a landscape, the only other action the ‘thin breeze through the damson trees’. Or ‘Bridges’ with its bassline of dizzy bounces and impressionistic drumming punching against an ethereal, hovering anti-melody as Jones reads us through a bird’s-eye float over an anonymous cityscape.

What is perhaps most confidently insistent about And Also the Trees in 2016 is this reversal of the English song tradition: from the pastoral, kestrel-hover guitar swells to the krautrock rhythms and scene-setting texts, AATT subtly turn the English folksong around to bring its background to the front. Rather than being songs about characters that exist within a landscape, these characters exist, a bit like John Constable’s, to populate the landscape as an integral part of it. Indeed, it is the landscape itself that takes action in these songs, as in the denouement of ‘Seasons and the Storms’: ‘Gold rays of light / shine through the hammock on the lawn / breaking on the shore.’ The band’s interest in Japanese woodcuts – the instrumental ‘Naito-shinjuku’ – as well as tanka poetry and, I would imagine, Noh theatre is a logical extension of this reversal. Jones’s lyrics often rely on Japanese landscape poetry’s crisp colours and twists of the reader’s eye; the band’s enveloping backdrops on the tableau vivant of Noh. 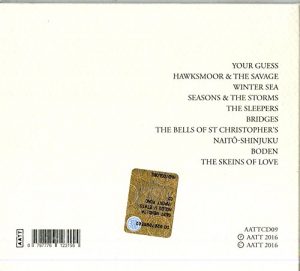 For AATT the landscape is the sentient creature of the song’s story, like in some of the stories of MR James or, perhaps, Ben Wheatley’s film A Field in England. The landscape (cityscape; seascape) isn’t merely a setting; the characters, rather, are the adornments allowing us to see the landscape for what it is. It’s an eco-poetry that effectively uses the traditions, if not the sonics, of ‘Gothic’ rock music to dissolve boundaries between humankind and its environments – what philosopher and literary critic Timothy Morton might call ‘dark ecology’. (Morton has connected his environmental philosophies to ‘Goth’ in the past, and in a way that AATT might appreciate: I recall hearing them interviewed in the early-1990s and, asked about the G-word, they responded, ‘We’re probably the only truly ‘Gothic’ band – in the architectural sense.’)

Few bands have enjoyed such a long career as AATT. Fewer still have made it so far with so little commercial success (although the band does enjoy crowds in France, Greece, Japan and a few other places far from home), and even fewer have done so while creating such a unique, identifiable and aestheticized sound. What’s perhaps most interesting about Born Into the Waves, testament as it is to the power of honing one’s artistic output, is that the rest of the art world has, perhaps, caught up to And Also The Trees. Today’s interest in the eerie, the uncanny and the alchemical within the British landscape, particularly in contemporary art, film and literature, could find few better musical companions for the continued exploration of the watchful watcher of an English field. 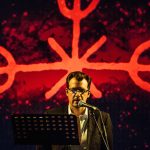 Justin Hopper is an American writer living in England. His poetry, nonfiction and curatorial work explores the intersection of landscape, memory and myth. His book The Old Weird Albion: A Journey Into the Heart of the English South is forthcoming from Penned In The Margins. You can visit his website here. www.justin-hopper.com