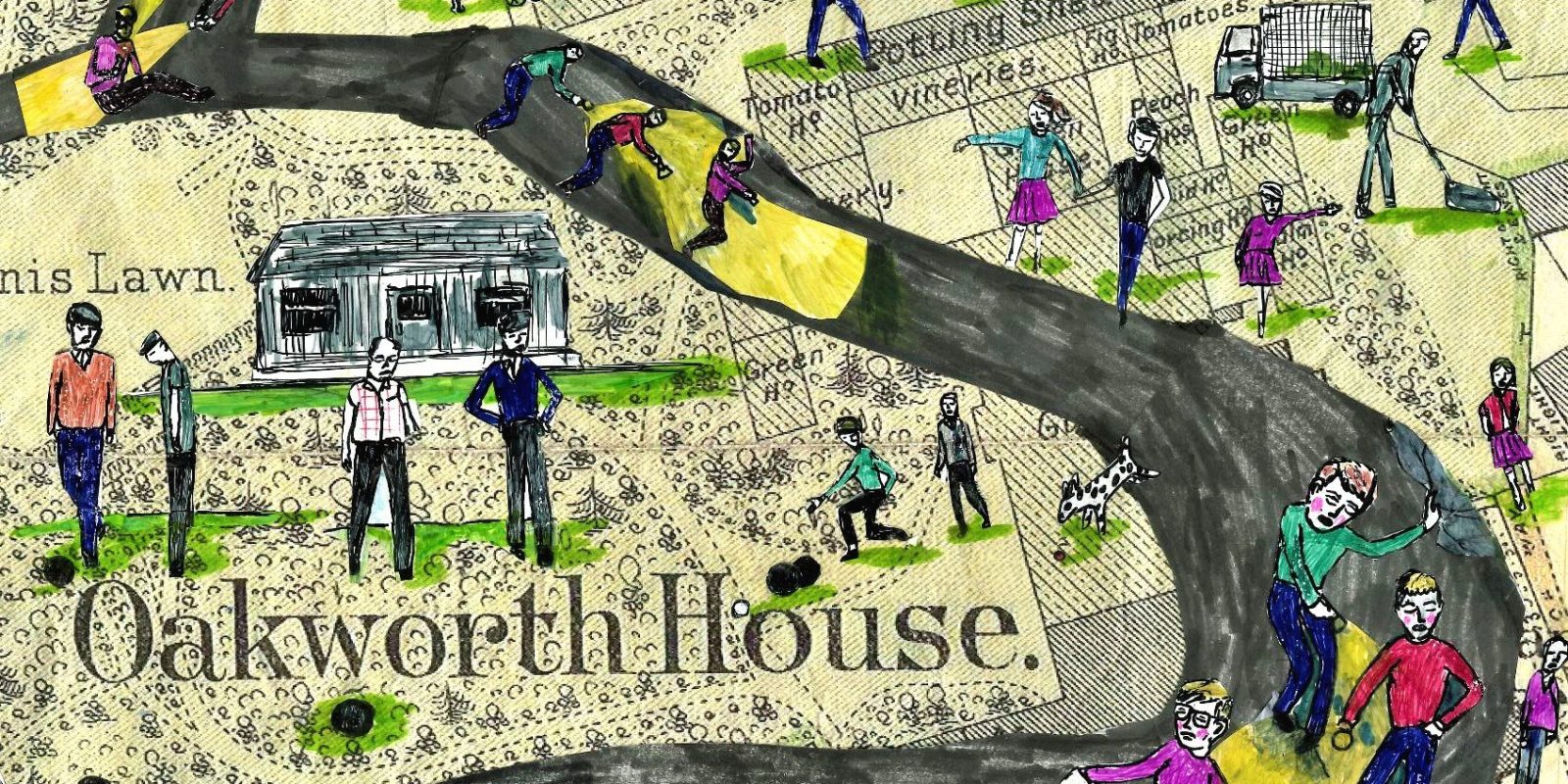 In the picturesque village of Oakworth, West Yorkshire, is Holden Park, often referred to as ‘Oakworth Park’ by locals. It once formed the grounds of Oakworth House, the home of esteemed inventor, manufacturer and radical liberal politician, Sir Isaac Holden.

It was a sunny afternoon in 1991 when I ventured there with two school friends.  We had heard a story from someone at school about a tunnel which ran underneath the park. Although seemingly unknown to most people in the area, this tunnel was common knowledge amongst local children and so we went to have a look.

One of the boys I went with must have known its location as I don’t recall us having to search for it. Within one of the cave-like rock formations that decorate Holden Park was a tiny opening in the stones. It was just big enough to crawl through.

I was not a particularly adventurous boy, but something about going down this tunnel appealed to me. I suppose I’d probably read numerous Enid Blyton novels by then and watched the Indiana Jones films enough times to get the message that tunnels are generally worth going in.

One by one, all three of us climbed inside the tight opening in the rock, too small for any adult to fit through. This led to a small alcove like room which was large enough for us to sit up in. From inside this room, another opening below was visible. We had to crawl downward through a short tunnel and underneath a pipe to get through it. This led to the main tunnel which we could just about stand up in when crouching. It was pitch black now, but we didn’t have a torch; just the light from a digital watch. We decided to call off this particular expedition and come back the following weekend more prepared.

All week at school the conversation returned to the mysterious tunnel and what secrets it may hold. Here was our chance to live out a ‘Goonies’ style fantasy on our own doorstep, or that’s how I thought of it anyway.

We travelled from our home town of Keighley the following weekend with a torch each, fully equipped this time for an afternoon’s adventure. Once back in the main part of the tunnel, we walked along it until it came to a dead end. We then turned around to investigate what was in the other direction. We followed its downward slope to another dead end; a wall with rocks and cement piled up against it, and some strange white globs of something or other. We could hear the sound of voices and bowling balls clicking against one other above our heads.

We were now directly beneath the Bowling Green on which Oakworth House had once stood.

One of its most notable features was an air-conditioning system which required a complex network of ventilation shafts, as well as a huge basement furnace.

When Isaac Holden died in 1897 no buyer could be found for the property and so the house stood derelict for a decade. It was ravaged by fire in 1907 and partially destroyed, before being completely demolished in 1909.”

At the time, we knew little of this past, only that we had stumbled upon one of its subterranean secrets….

A few metres before the end of the main tunnel was an opening in the floor. We climbed down to find ourselves inside a room. This room had a very low ceiling and we had to crawl around on the floor amongst rocks and decades of dust to move around it. Some detritus from previous visitors was scattered around; a few crisp packets and Coke cans. There was not much of this detritus though, just a bit, so perhaps we were, if not the very first to visit; at least among only a small number who had made it here over the years.

We crawled to the other side of the room where it was possible to fully stand up and there was a red brick wall. We hung around chatting for a short time before deciding to make our exit. This didn’t really feel like the kind of place to outstay your welcome.

The whole place looked pretty fragile, like it could cave in at any moment, entombing us for eternity. We obviously didn’t tell our parents where we were going so if it had caved in no-one would have a clue where we were. You can just imagine the news reports about the three boys who disappeared without a trace on a summer’s day. Still down there now, waiting in the dark to be found; reduced to an enduring mystery, occasionally revived by internet sleuths, if we were lucky.

We made our way out and I never went in the Holden Park tunnel again. I heard the entrance was filled in with concrete not long after my visit there; no doubt to prevent any other local youths from exploring it in future. I have not actually visited Holden Park since my subterranean wander there thirty years ago though, so it is vaguely possible that the entrance to the tunnel is still open, but I suspect not.

It was only when I decided to write this article that I put any serious thought into what the tunnel and room actually were. I did a little research, it wasn’t difficult to find out about Oakworth House; I had just never looked. I have found no reference to the tunnel whatsoever, or any mention of anyone else going in it. I only know that it’s existence must have been common knowledge among local kids at the time, because that is how I found out about it. Apart from local children, it is possible then, that it was not generally known about.

It seems possible to me that the underground room that my friends and I found may have been part of the ‘huge basement furnace’ which was the foundation of Oakworth House’s innovative and elaborate ventilation system. It is also possible that the main tunnel we went in was originally one of the ventilation shafts that led to this. We will never know the answer for sure though.

The tunnel and the room are no doubt still there beneath the bowling green in Holden Park. They stand now as one of the last remaining echoes of Oakworth House, hidden from view and deprived of any modern visitors. A sorry subterranean tombstone for a place that was once so full of life and rich with the promise of Isaac Holden’s dreams and vision.

ABOUT THE AUTHOR/ILLUSTRATOR:
Patrick Wray is an artist originally from up North, but now based in London. He published his debut graphic novel The Flood that Did Come via Avery Hill in 2020. You can find out more about his work at www.patrickwray.com