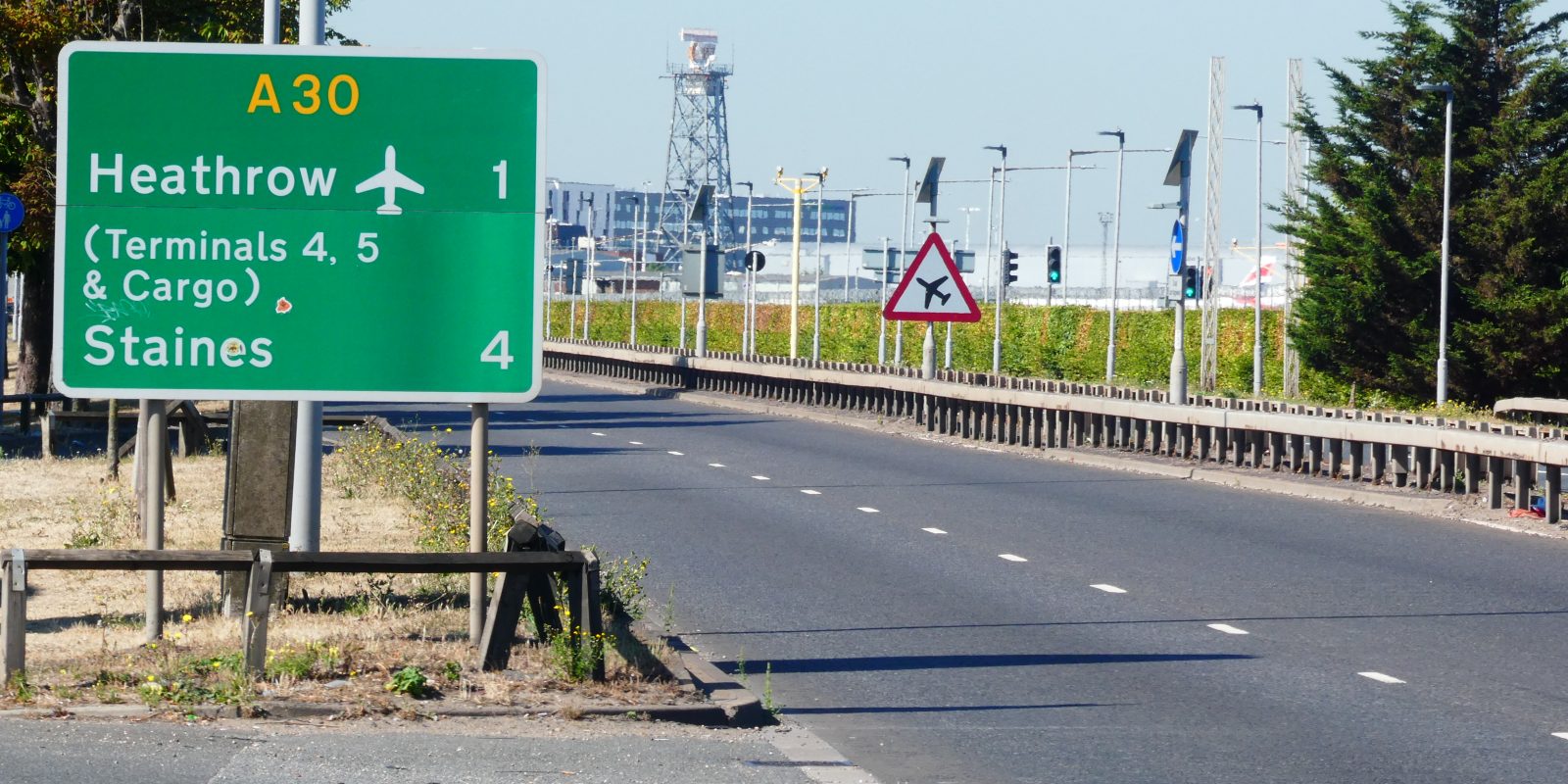 A Walk Through the Pre-Industrial Landsc ...

A chance observation alerted me to the history in Heathrow’s hinterland. The words ‘tithe barn’, printed on an OS map, in a gothic typeface, about five centimetres above the northern runway. A quick search showed it was the Great Barn in Harmondsworth. It hinted at a rural, pre-industrial world, in part of greater London I had associated with flight paths, flyovers and distribution centres.

Further research revealed the barn was well known. Of the medieval timber framed barns to have survived the centuries intact, this was the largest. Sir John Betjeman had called it the ‘Cathedral of Middlesex’. But what about other villages neighbouring the airport? Was there more to be seen? Used local history books arrived in the post. These formed the basis for unconventional Sunday walks terminating at Hatton Cross and West Drayton. I realised you could circumnavigate the airport on foot. A month or so later I boarded a train to Staines.

Thousands of people must look out on Staines Moor each week. About 70% of aircraft leaving Heathrow take off to the west and this piece of common land, grazed since the 11th century, lies close to a flight path. I entered through an underpass. The moor is under siege. Surrounded by a dual carriageway, a motorway and the King George VI Reservoir. But nature survives and thrives. Numerous bird species use the moor which also boasts the oldest known ant hills in the UK. ‘It was as if someone had taken a square mile of best Suffolk countryside and dropped into the space between the A30 and M25’, said the writer Bill Bryson in his book The Road to Litte Dribbling.

Staines Moor sits at the base of Colne Valley Regional Park. It is a green belt corridor just to Heathrow’s west. Remove it, and there would be little stopping west London from sprawling into Staines, Windsor and Slough. I planned to follow the Colne Valley Trail to Colnbrook. The town is less than two miles from Heathrow’s northern runway, and the journey was a real edgelands ramble incorporating a crossing of the M25 and a walk beside DHL’s southern distribution centre.

Fortunately, Colnbrook was worth the trip. Houses and a handful shops lined the main street which was once an old turnpike road. The town’s history was detailed on several signs evidence, perhaps, of a degree of civic pride. I learned Colnbrook was once home to a handful of coaching inns. Two of them survive. And one, The Ostrich Inn, claims to be the third oldest pub in England. It all gave the place some character. And with a slab of imagination, you could envisage life when the turnpike not terminal five was the local transport hub.

Colnbrook had insulated itself from Heathrow but as I neared the northern runway the airport’s influence became impossible to ignore. A change in wind direction meant aircraft were landing from the west. Planes roared overhead as I walked through Poyle and things grew even louder as I bridged the M25 for a second time. Respite came when I turned onto a footpath, heading north, towards Harmondsworth.

I had hoped to explore the old barn, but it was closed so I toured the village. It was an unlikely neighbour for an international airport. Yew trees massed around a church with a 12th century doorway while a red phone box stood on the tiny village green by The Three Bells pub. ‘Stop Heathrow Expansion’ signs adorned almost every lamp post. Was this NIMBYISM? A third runway would destroy a chunk of Harmondsworth. Perhaps a different acronym applies when they are demolishing your actual backyard.

The area around Heathrow was known for market gardening. That trade is gone but there is still some arable farming on land next to the village. I used a footpath to traverse a field and climbed a stile before dropped down to the Bath Road. Suddenly every building was ancillary to the airport and hotels dominated. They came in a variety of architectural styles, from the brutalist (Sheraton Skyline), and the functional (Premier Inn) to the indescribable (Radisson Blu Edward).

The Bath Road was the main route into London for travellers in the west. And you can still find a couple of milestones beside the road near Heathrow acting as reminders of this history. It was not always the safest route, In the 18th century, the area around Hounslow Heath, east of the airport, was known for highwayman.

Policing was a local matter then and we can see this in Cranford. The village, on the Bath Road at the northeast corner of Heathrow, had a lock up to detain suspects caught by the local constable. The small brick building with a conical roof and iron door survives. It was built in 1838 but may have replaced an earlier lock up.

Hatton, about a mile south of Heathrow, was also associated with highwaymen. But there is not much left of the old hamlet – the construction of the airport destroyed a large portion of it. Nonetheless it does have a spot on the tube map. In 1975, Hatton Cross station opened to alleviate airport traffic and for a short period it was the only tube station serving Heathrow. Today it has a retro feel. Observant travellers, with good memories, might recognise the ‘Speedbird’ logo of the British Overseas Airways Corporation depicted in a mosaic on a platform column.

Hatton Cross provided a convenient starting point for my exploration of Heathrow’s southern perimeter. It is also useful if you fancy a bit of plane spotting. A patch of grass by Myrtle Avenue, just a short walk from Hatton Cross, is a popular spot for aviation enthusiasts. Type the street name into YouTube and you will find numerous videos of low flying jets descending over local houses.

By the time I had reached Terminal 4, any plane spotting opportunities were gone. The tarmac was obscured behind buildings and my attention had shifted to the rivers flowing by the perimeter road. They both looked manmade and had I not known better I would have assumed they belonged to the airport. But although they are artificial, the Longford River, dug to supply Hampton Court, and Duke of Northumberland River, set up to carry water from the River Colne to the River Crane, both predate Heathrow by several centuries. And if their channels appear modern, it is because their course was altered to accommodate the airport.

I walked between the two rivers before crossing a bridge into Stanwell. I was looking for a route across two large reservoirs just to the northeast of Staines. The pair, known as Staines Reservoirs, hold 14.5 million litres of water. But there was nothing to see from Stanwell apart from their steeply embanked sides. It was only when I found the path to a causeway across the two reservoirs that I gained a better view. It was worth the wait. A wide expanse of blue water shining in the sunshine.

I stopped halfway across the causeway. A low flying bird touched down on the flat surface before skidding across the water. In the distance a Virgin Atlantic jet rose out of Heathrow before wheeling away towards its flight route. I was just a 20-minute walk away from Staines station once I crossed the reservoir, but I was in no rush. There might be more beautiful places to walk near London but few match the interest of Heathrow’s Hinterland.

Marcus Liddell is a former local journalist turned History teacher living in west London. He is particularly interested in the physical legacy of the distant past. (Old Roman roads, ancient boundaries, medieval churches etc.) He has previously written for BBC News online. When he is not in the classroom, or on a footpath, you will find him following the fortunes of Chelsea FC.